Lionel Messi is the ace in Argentina's pack

French could be toast on nervy afternoon in Kazan 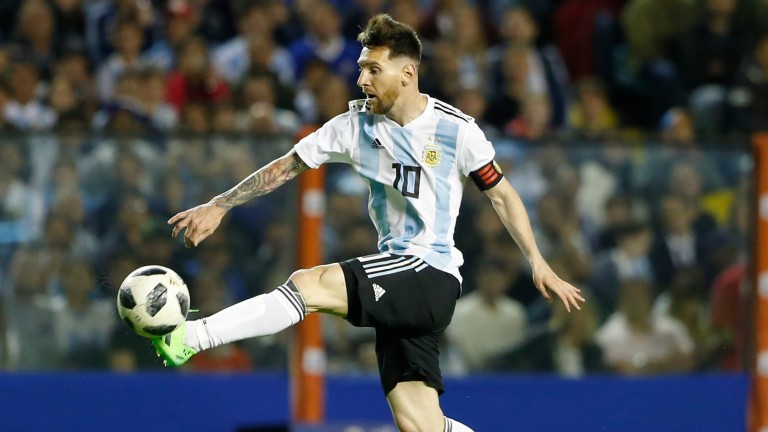 Argentina came back from the brink of World Cup elimination on Tuesday and they can make the most of their reprieve by beating France in Kazan.

There was a huge difference between the teams' fortunes in the group stage with France getting the job done in two matches and Argentina paying scant regard to their supporters' emotions.

But strength can sometimes be forged in adversity and Argentina could be more battle-hardened for the tasks which lay ahead.

There has been talk of a lack of unity in the Argentina camp but the dynamics are likely to have changed since Marcos Rojo's sensational late intervention against Nigeria.

Jorge Sampaoli's side left it late and were far from perfect on a nail-biting night in Saint Petersburg, but there were signs of improvement from what had gone before.

Lionel Messi was looking far more engaged and produced a superb finish for the opening goal, latching on to a superb pass from Ever Banega.

Messi's developing understanding with Banega is something Argentina can build on as they plot an extended stay in Russia.

They can also be encouraged by the team spirit they showed after Nigeria levelled from the penalty spot.

Sampaoli's side lost their discipline and their heads in their defeat to Croatia, but they seemed to have learned their lesson and kept on probing away until Rojo popped up with a deserved winning goal.

Argentina are moving in the right direction and that is more than can be said of France, who were dismal in a 0-0 bore draw against Denmark on Tuesday.

After France laboured to victories over Australia (2-1) and Peru (1-0), the Denmark game looked a perfect opportunity for them to play with some freedom and give their fans something to get excited about.

But Les Bleus were clueless in their efforts to break down a disciplined Danish defence and the game finished with large sections of the crowd whistling their disapproval.

There are similarities to Euro 2016, when France got out of the group with unconvincing victories over Romania (2-1) and Albania (2-0) and a 0-0 draw against Switzerland.

The draw worked out for them two years ago – they defeated Ireland and Iceland on their way to the semi-finals – but it has been less kind in Russia.

It may seem harsh to be critical of a side who didn’t concede from open play in the group, but France are not playing anything like potential champions.

With N'Golo Kante working his socks off in front of the defence they have looked secure defensively, and there is a possibility that their two best attackers, Antoine Griezmann and Kylian Mbappe, will be seen in a better light against teams who play more positively.

However, Argentina will be aware of the threats and the contest could become a tactical affair with both teams looking to play on the counter.

Chances could be at a premium but Argentina have an obvious ace in their pack in Messi and look value to win a tight encounter.

France
Team news
Benjamin Mendy and Djibril Sidibe made their first appearances of the tournament against Denmark and could continue if they have proved their fitness.

Strengths
The onus will be on Paul Pogba to provide the creative spark and locate the forward runs of Kylian Mbappe and Antoine Griezmann.

Weaknesses
France rely on their full-backs to provide width but Sidibe and Benjamin Mendy have room for improvement after poor performances against Denmark.

Key man
Pogba has plenty of critics but his midfield drive was sorely missed in the final group match.

Argentina
Team news
Ever Banega impressed and should keep his place. Gonzalo Higuain and Sergio Aguero are competing for one of the two striking berths.

Strengths
Lionel Messi has belatedly arrived at the World Cup party and lively winger Cristian Pavon has produced some eye-catching cameos off the bench.

Weaknesses
Gonzalo Higuain and Javier Mascherano had a night to forget against Nigeria and need to improve.

Key man
Ever Banega's eye for a pass was instrumental in Argentina's much-improved performance on Tuesday. He surely has to keep his place.

Key stat
Argentina have won all of their four matches against France.

Weather
Warm and dry in Kazan. 8mph breezes and 28C.