Lincoln can bring cup heroes Newport back down to earth

County may be distracted by Wembley trip 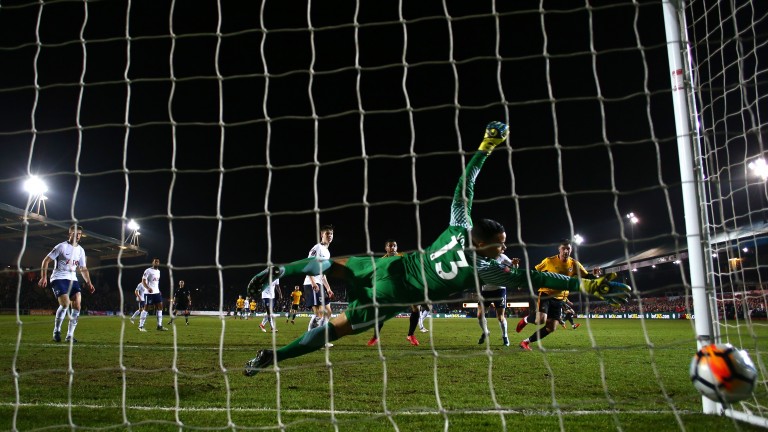 Padraig Amond scores for Newport during their FA Cup clash with Tottenham on Saturday
Michael Steele
1 of 1
By Dan Childs 8:00PM, JAN 29 2018

Lincoln v Newport
Newport are heading to Wembley next week but must play two important league games before reacquainting themselves with Tottenham, starting with a tough match at Sky Bet League Two promotion rivals Lincoln.

The Welsh side produced a brilliant performance to hold Spurs to a 1-1 draw on Saturday and looked on course to pull off a massive shock until Harry Kane was given the freedom of the penalty area to tap home a simple equaliser.

The majority of the bumper 9,836 crowd are now planning their trip to Wembley for a contest which will provide another major boost to County's coffers.

However, there is a slight downside to the cup run because Newport have worked hard to get close to the League Two playoff positions and are in danger of becoming distracted.

They dropped important points last Tuesday, drawing 1-1 at home to Morecambe, and could lose further ground unless they can replicate the energy and enthusiasm evident against Spurs.

Exiles manager Mike Flynn is saying the right things about not looking too far ahead but it will be a tough task getting through to a group of players eagerly anticipating one of the biggest occasions of their careers.

One or two individuals may struggle to match the standards set at the weekend and Lincoln will be ready to capitalise.

The Imps, who are in the hunt for successive promotions, are one step away from booking a Wembley date after reaching the semi-finals of the EFL Trophy.

Last Tuesday's 4-2 success at home to Peterborough in the EFL Trophy quarter-final was Lincoln's sixth win in seven home games and they look value to bag another victory at fortress Sincil Bank.

Stevenage v Swindon
Swindon have the best away record in League Two and they can make it ten wins from 14 road trips at the expense of mid-table Stevenage at Broadhall Way.

It has taken a while for Swindon to adjust to the fourth tier, although they took a major step forward by coming from 3-1 down to defeat Crewe 4-3 at the County Ground on Saturday.

They have struggled at home but dug deep at the weekend and were deserved victors after winning the shot count 16-5.

David Flitcroft's side will have gained confidence from the performance against Crewe and are heading to Hertfordshire at the right time.

Stevenage won 1-0 at struggling Chesterfield on Saturday without playing particularly well, but are nine points adrift of the playoffs and may lack the quality to match Swindon.

Wycombe love a challenge and look overpriced to spring a surprise against League Two leaders Luton at Kenilworth Road.

It is hard to be critical of Luton, who are the top scorers in the fourth tier and hold a nine-point lead over second-placed Notts County.

But the Hatters have lost some of their cutting edge with injured top scorer Danny Hylton sidelined and may feel a little leggy after playing with ten men for over half of Saturday's 1-0 win at Grimsby.

The Hatters may not be at their best for this tough test against Wycombe, who are physically strong and chasing a fourth straight league win.