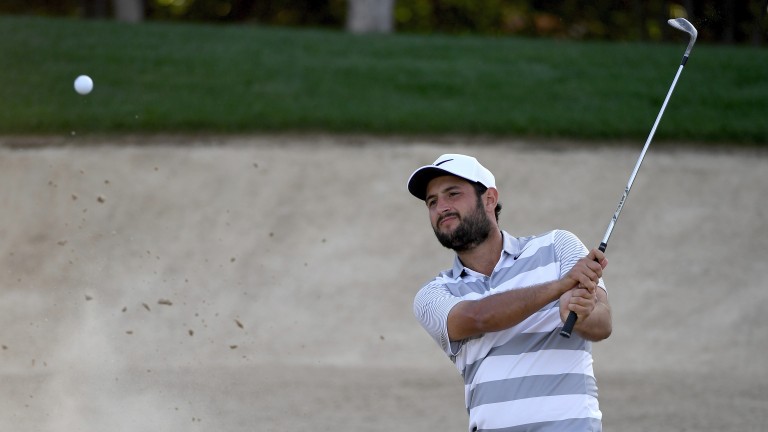 Alexander Levy impressed with all departments of his game in round three
Ross Kinnaird
1 of 1
By Steve Palmer UPDATED 12:36PM, APR 22 2018

Story so far
Alvaro Quiros was easy to back at 200-1 ante-post for the Hassan Trophy, but the Spaniard is perched atop the leaderboard with 18 holes to play in Morocco.

Quiros, a seven-time European Tour champion at the age of 35, ended a winning drought of almost six years at the Rocco Forte Open last May. He has missed 16 cuts in 19 starts since that success in Italy.

Quiros has proved he can suddenly find winning form from nowhere, but he has served up such tripe since his last victory that he can still be backed at 11-2 for Hassan glory.

There is a four-way tie for second place, the quartet just a shot behind Quiros. Four-time European Tour victor, Alexander Levy, is among the immediate pack of pursuers and the Frenchman is 19-5 tournament favourite.

Final-round advice
Alvaro Quiros is difficult to fancy for Hassan success despite his advantage. There is nothing to worry about for his supporters in terms of courage – he has shown plenty of times in the past he has got the guts – but technically the modern Quiros always looks like an accident waiting to happen.

Quiros has found a way of avoiding anything worse than a bogey so far this week, but he has needed lots of magic along the way, and the suspicion is that keeping the scorecard relatively clean for another 18 holes will be beyond him.

The Es Salam layout is far from straightforward – there are some demanding drives, challenging approaches and undulating greens – and Quiros is probably too wild to get the job done. His scores have been getting progressively worse (67, 70, 72) and that trend could easily continue on Sunday.

Erik van Rooyen has won on the Sunshine Tour and the Challenge Tour, but the South African still appears to find the tension of contending for European Tour glory too much. Birdies seems to flow early in the week, before he tightens up at the finishing line looms.

Christiaan Bezuidenhout is another young South African still learning how to control his nerves in European Tour combat, while Austin Connelly is in the formative stages of his career. The main threats to Quiros in round four will probably come from Alexander Levy, Mikko Ilonen and Jeunghun Wang.

Levy played beautifully for most of round three, his only blemish a three-putt from a difficult spot just short of the 17th green, and the Ryder Cup hopeful deserves top billing in the betting. He won the China Open almost exactly a year ago and has produced plenty of good golf since.

Ilonen has won five times on the European Tour and Wang has quickly got three on the board, so these are two other proven champions lurking dangerously.

Racing Post Sport followers are on ante-post selection Levy at 25-1, so cautious punters may want to have some cover on Ilonen at 17-2 or Wang at 11-1. Wang looks a generous price given his maiden victory came on this track in the 2016 Hassan.

Punters yet to strike a wager should consider Levy, who is looking cool and confident. He started with a double-bogey on Thursday and followed with 13 pars and a bogey to slip to three over par, working a month of competition rust from his system, but he closed with three threes and has looked a potential champion ever since.

Final-round threeballs punters are pointed towards Ilonen, who seems likely to be the calmest member of the final group. The Finn tees off alongside Quiros and Bezuidenhout at 12.15pm UK and Ireland time under what is expected to be sunny, windless skies.

An outright wager on Levy and a threeball wager on Ilonen should provide a strong run for money in Morocco.