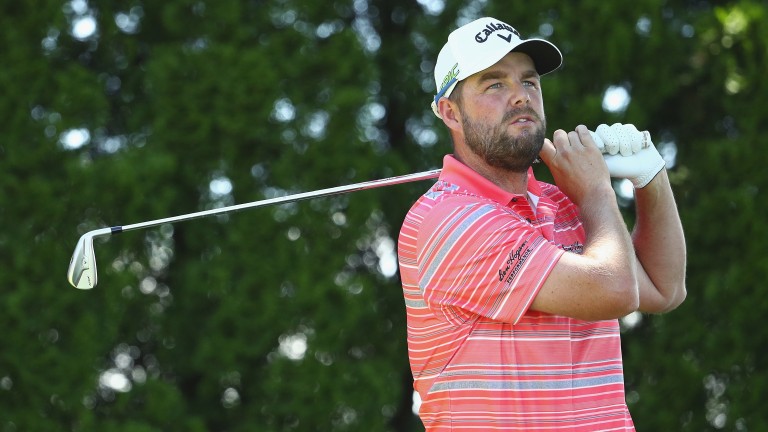 Saturday at the BMW Championship was a triumph for long-time leader Marc Leishman, who managed to extend his advantage from three shots to five.

Leishman, a 45-1 chance ante-post, had the formidable duo of Jason Day and Rickie Fowler hunting him down, but repelled them both with a remarkable degree of comfort.

Day performed abysmally in round three, while Fowler endured torment on the greens, allowing Leishman to kick clear without doing anything spectacular. The frontrunner is no bigger than 2-5 to complete the job and land the biggest title of his career. It is 35-1 bar Leishman, Day and Fowler.

The FedEx Cup leaders have all failed to sparkle at Conway Farms. Jordan Spieth is 12 shots behind, sharing 27th place, while Justin Thomas is a further two shots off the pace. World number one Dustin Johnson is languishing in 55th spot, 18 shots adrift.

Marc Leishman loves firm, fast conditions, and thrived at a baking Conway Farms in round three, not giving the chasing pack a sniff of his lead. He found it surprisingly straightforward to fend off two of the best players in the world.

Sundays are obviously a different kettle of fish to Saturdays, but the excellent Saturday work of Leishman has made his Sunday assignment a great deal easier. Even allowing for the inevitable pressure and nerves he will feel, a five-shot buffer will probably be enough.

Leishman has never been convincing in elite company, residing just outside the top rung on the golfing ladder, but he has won two US Tour titles and a prestigious European Tour one (Nedbank Challenge). If things were tighter at the top, he could be expected to buckle in the face of a truly world-class talent like Day or Fowler, but the comfort generated by a five-shot gap should keep his shoulders loose.

Day was shocking in round three, given how impressive he was over the first two days. The former world number one took a strangely defensive approach to the course, using an iron off most tees, and never applied any heat to his playing partner Leishman. On the rare occasions when Day unleashed his driver, the results were more positive, so he can be expected to improve his tactics and score in the final round. Whether it will be enough to threaten Leishman, though, is doubtful.

Fowler seems the biggest danger to Leishman. The American has attacked throughout the tournament and played beautifully for the most part. A three-putt par at the eighth hole was a bitter pill to swallow midway through his third round, coming after a magnificent driver off the deck found the green, and it seemed to take the wind from his sails. He played over par to the hut from there, luckless on the greens.

Fowler's swing has remained in top order all week, though, and the cool Californian was philosophical after his disappointing third round, appreciating the difficulty in stringing four stellar rounds together. Calm and happy to attack this track, Fowler gets to play alongside Leishman for the first time this week, and will look to throw down the gauntlet to the Aussie early on.

Fowler opened with an eagle in round three and seems likely to wield driver at the short par-four again if conditions suit. If Fowler makes a strong start and applies front-nine pressure to Leishman, a thrilling final round could be in store. Fowler was awesome on the back-nine over the first two days, so knows he has an electric finish in him. If Leishman retains his advantage to the turn, though, the task for his pursuers probably becomes too great.

Racing Post Sport followers are looking good for a BMW profit, with strong ante-post each-way investments on Fowler at 14-1 and Day at 18-1, and hopefully one or both of them can push Leishman all the way. Sadly, Leishman at 2-5 does not present much in the way of a trading option for punters looking to shore up their position.

The weather forecast is a worry for tournament organisers, with a serious thunderstorm threat at the time the leaders are duo out (6.50pm UK and Ireland time). A Monday finish may be required if the rough stuff materialises and lasts for a few hours.

Final-round twoball punters are pointed towards Charley Hoffman, who produced a superb, bogey-free, four-under-par back-nine in round three, and is buzzing with a Presidents Cup debut on the horizon. He is playing well as he prepares to represent his country for the first time and should be shorter than 10-11 to defeat Ryan Moore, who has been struggling for fitness and form all summer.