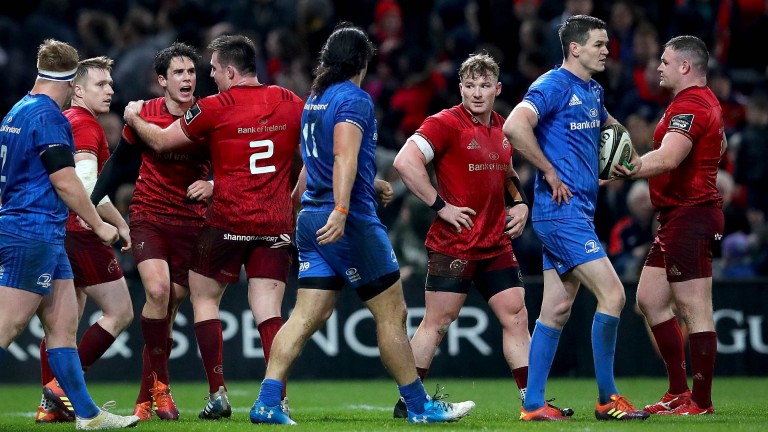 Munster with a handicap start of seven points from defending champions Leinster looks the best bet in a scintillating second Pro14 semi-final at the RDS.

A year ago, the great rivals met at the same stage at the same Dublin venue seven days after Leinster had won the Champions Cup in a bruising battle with Racing 92. The boys in blue withstood a grandstand finish from Munster to claim a 16-15 victory.

On this occasion, Leinster need to raise their spirits a week after they were beaten 20-10 by Saracens in a heavyweight bout in Newcastle for the European crown. Meanwhile, a rested Munster are boosted by the return from injury of fly-half Joey Carbery and talisman outside back Keith Earls.

Don't read too much into Leinster's recent league form or Johnny Sexton's switch to the replacements and head coach Leo Cullen's other team changes from St James' Park.

Leinster showed their class in sealing top spot in Conference B weeks ago and Ross Byrne started at fly-half a year ago and was at the controls for Leinster's 30-22 regular-season success over Munster at the Aviva in October and their Champions Cup quarter-final win over Ulster.

However, it is hard to ignore that Carbery, who kicked the penalty that proved the difference for Leinster from full-back last year, has been the catalyst for most of Munster's best efforts this season including when they exacted revenge at Thomond Park in December with a 26-17 victory.

Leinster were collectively uncharacteristically ill-disciplined that night in Limerick and James Lowe saw red in the first half.

Munster, with their minds focused by their narrow home qualifier success over Benetton, have the pack power in their starting line-up and on the bench to keep the pressure on again for the whole 80 minutes.

Ospreys suffered disappointment in last year's playoff for the final Pro14 place in the Champions Cup against Ulster in Belfast, but they look worth a wager to edge out Scarlets at the Liberty Stadium and qualify for Europe's premier competition this time around.

The Ospreys concluded the regular season with an intense, last-gasp 26-23 victory over Cardiff at the Principality Stadium whereas the Scarlets took the foot off the gas in their Judgement Day meeting with the Dragons and lost 34-32.

The Liberty lads have been so strong all league campaign in Swansea with seven wins out of nine, including a 17-12 eclipsing of the Scarlets, with the only defeats coming to Conference A winners Glasgow and runners-up Munster.

Scarlets head coach Wayne Pivac has certainly named a side capable of ending his tenure on a high but their only road win this campaign was at the Kings.