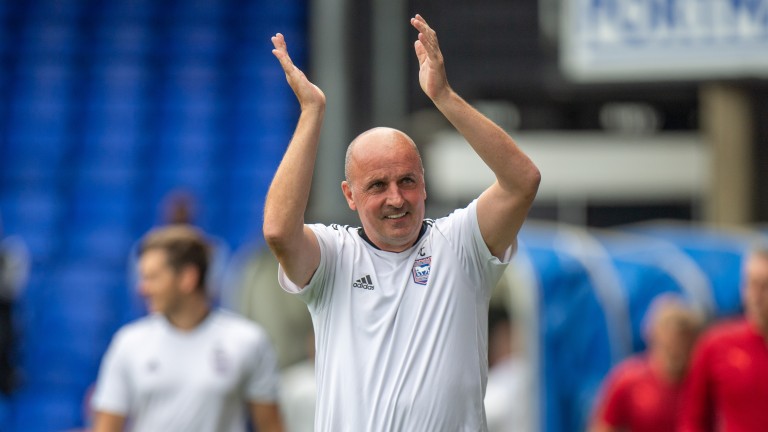 A US-led takeover has changed the scenery at Portman Road. Capable boss Paul Cook has brought in a galaxy of decent names on handsome wages and if they click early – as they have in each of the last two seasons – then it's hard to see them taking their foot off the gas. There are goals among Joe Pigott, Conor Chaplin, Macauley Bonne and James Norwood.

The Owls didn't exactly nosedive out of the Championship – without their points deduction they would have survived – but fall they did. The summer exodus was extensive and owner Dejphon Chansiri has reined in the spending. Landing keeper Bailey Peacock-Farrell was a coup and there is tier-two quality elsewhere, though more fire power is still needed.

Form figures of 5-7-4 since relegation suggest the big-spending Black Cats will be there or thereabouts once again. The beaten playoff semi-finalists have made one or two decent recruitments – Callum Doyle and Alex Pritchard – but replacing Charlie Wyke's goals has to be a worry.

With four promotions and three relegations since 2012-13 it's safe to say it's never dull watching the Millers. Matt Crooks' sale to Middlesbrough was a blow but it at least gave Paul Warne cash to spend, even if he's been cagey doing so. However, they have spent five of the last seven seasons in the Championship, so Warne's Millers have bags of clout.

The only way has to be up for the Latics, now out of administration and backed by Bahraini cash. It has been a widescale rebuild under Leam Richardson with some quality names through the door – Max Power, Sunderland's top scorer Charlie Wyke, Tom Naylor, Ben Amos, Jack Whatmough and more. They have to be contenders.

The capable Nigel Adkins has replaced the capable Lee Bowyer but it isn't easy to get overly excited about the Addicks, who just missed out on last term's playoffs. Once-prolific Jayden Stockley needs to step up with Chuks Aneke gone but so too does a seriously leaky defence which shipped 37 goals in 23 home matches.

Boss Russell Martin's exit to Swansea was, according to the players, a factor in their season-opening 5-0 drubbing at Bournemouth. Key arrivals, many of whom seemed to sign because of Martin and the style of football he preached, are clearly devastated and you've got to suspect it will have a negative impact.

It's hard to see Lincoln disappearing from view under the adroit Michael Appleton. Star men Jorge Grant and Brennan Johnson have left but Liam Bridcutt remains and arrivals of the calibre of Chris Maguire, Teddy Bishop and Lasse Sorensen have to instil positivity. Lively Dan Nlundulu, a loan steal from Southampton, could be the wild card.

There's an air of unease around Fratton Park where Pompey could be one of this season's flops. An exodus of decent pros gave Danny Cowley a headache and recruiting hasn't looked easy. Unhappy fans are praying John Marquis can rediscover his mojo, that wildcard Gassan Ahadme carries on his pre-season scoring form and that injuries don't become an issue.

For the second summer in a row a defensive cog has left the Kassam – Rob Atkinson this time – and Karl Robinson has been measured in his response. There is potential (but no guarantees) from previous loanee Marcus McGuane, Ryan Williams and injury-plagued Billy Bodin. They must improve against better teams – just one win last season in 16 matches against top-nine sides.

Relegated Wycombe will be heartened rather than dismayed at the manner of their demise when everyone presumed they would be tailed off. Frontmen Uche Ikpeazu and Fred Onyedinma have stayed in the Championship but Sam Vokes has come the other way. Exciting Sullay Kaikai is a great signing after a stellar season with Blackpool.

Failed to land the odds in League Two but did go up and should be competitive if Eoin Doyle can continue to bang in the goals. Josh Sheehan, a star at Newport, and Xavier Amaechi, an ex-Arsenal youth prodigy picked up from Hamburg, are decent signings. Covid and injuries could conspire to make it a slow start for Bolton with boss Ian Evatt clearly concerned.

Richie Wellens has been the architect of a rebuild at Keepmoat and while he'd back his first eleven to be contenders, strength in depth is a major issue – and with Covid concerns, depth could be critical this season. Faded to finish 14th last season and another mid-table outcome is on the cards.

Jimmy Floyd Hasselbaink deserved a medal for transforming the Brewers, who were bottom when he took over on New Year's Day before finishing 16th. Clearly, therefore, he has a squad who will play for him, though it's a squad he's demolished with a stack of signings. One significant newcomer, striker Louis Moult signed from Preston, is out till Christmas.

Alex went up the season before last as a side on the up and cemented their reputation with a rock-solid 12th place, far closer to the playoffs than the drop zone. David Artell's men play some nice football, the summer head count turnover hasn't been disruptive and Crewe can cruise into mid-division once more.

Stanley were outstanding in 2020-21, making a mockery of cramped relegation odds by finishing 11th. John Coleman will be hoping to get another tune out of a side packed full of youngsters. Ex-Colchester skipper Harry Pell adds experience and energy in a side who will outmuscle enough of their rivals to stay up.

In the playoffs two seasons ago, Fleetwood faded badly last time out and it's hard to pinpoint reasons why they can improve. Simon Grayson is a capable boss and he has made a couple of intriguing signings though no one has yet claimed to have filled Paddy Madden's boots.

Unable to sign players for fees and having endured a disrupted pre-season, expect a slow start from Steve Evans' Gills. Eventually they should prove more than good enough to stay afloat though financial restraints at Priestfield – and spending power elsewhere – have prompted Evans to warn this season could be tough.

The man who got Morecambe promoted – Derek Adams – has gone, warning he could take the club no further. Stephen Robinson has been handed the job of keeping them up and that will be a challenge. Top scorer Carlos Gomes Mendes has left, newcomer Jon Obika is out for months which piles the pressure on Cole Stockton.

Ryan Lowe has overseen a complete overhaul of Argyle's defence after shipping 80 goals last season. That was the reason why they lost 11 of their last 15 matches to tumble from top-half contenders to the brink of relegation. A similar battle is forecast this time.

There's a show of faith in youth at Plough Lane where goals have been scarce in pre-season – hardly a surprise after top scorer Joe Pigott's exit. All eyes are on teen striker Aaron Pressley to hit the ground running, Luke McCormick was excellent at Bristol Rovers last term and centre-back Darius Charles will be 34 in December.

Shrewsbury have struggled in each of the last three seasons and face a full-scale relegation scrap this time round. Steve Cotterill has signed a new keeper (Marko Marosi) and striker (Ryan Bowman) but they are additions to a squad which lacks depth. They couldn't buy a home win last season, finishing poorly with one win in their last eight.

The big conundrum at the Abbey is who can step up post-Paul Mullin after the 32-goal hitman's exit. Mullin's partner Joe Ironside may well lead the line on his own as Mark Bonner tweaks the system for the higher level with more bodies in midfield. Goals will surely dry up accordingly and survival is going to be a tall order.

Cheltenham are back in League One after a 12-year absence but may only be there for a few months. Michael Duff has found it hard bringing in new faces and looks to be largely sticking with the group who won League Two. Dan Crowley, a title-winner on loan at Hull last term, adds some pedigree in a squad who will struggle.