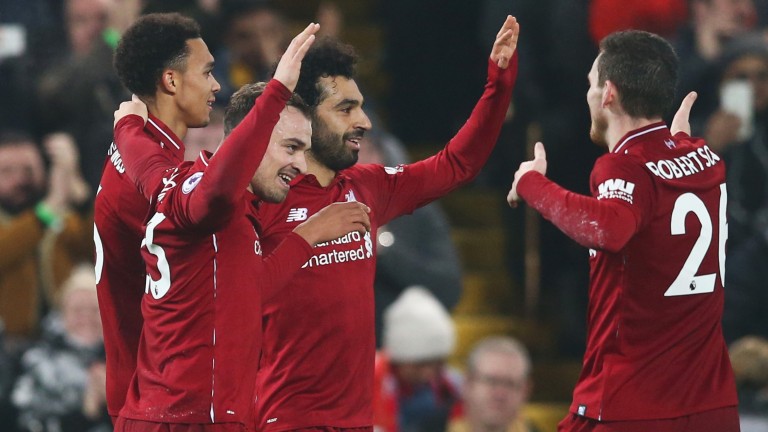 Liverpool are the new Premier League title favourites after moving seven points clear of Manchester City as the champions suffered a shock 2-1 defeat at 8-1 shots Leicester.

Jurgen Klopp's men, 8-11 to be crowned champions, had no such problems as they romped to a 4-0 victory over Newcastle, leaving their supporters dreaming of a first title since 1990.

Dejan Lovren gave the Reds an early advantage and Mohamed Salah's penalty shortly after half-time put the game beyond Newcastle before further goals from Xherdan Shaqiri and Fabinho sent the Kop delirious.

While Liverpool were in cruise control, City stumbled for the second time over Christmas, suffering a loss at Leicester so soon after Saturday's reverse at the hands of Crystal Palace.

The wins for the underdogs – Palace were 22-1 on the morning of their trip to the Etihad – was a 206-1 double and helps to explain why the title betting has been shaken up so much.

City took the lead, just like they did against Palace, through Bernardo Silva only for Marc Albrighton to equalise and it was left to Ricardo Pereira to humble Pep Guardiola's outfit with just nine minutes remaining.

Fabian Delph was sent off to add to City's misery and Guardiola's men are out to 15-8 to win the Premier League as they slipped down to third in the table behind Tottenham.

Spurs remain the forgotten side in this race, six points off Liverpool and 12-1 to lift the Premier League trophy, but they followed the 6-2 win at Everton on Sunday with an emphatic 5-0 bashing of Bournemouth at Wembley.

Christian Eriksen got the ball rolling and that was followed by a brace from Heung-Min Son as well as goals from Lucas Moura and Harry Kane.

Spurs will be hoping to chop away at unbeaten Liverpool's lead with a home game against Wolves and a trip to Cardiff whereas the Merseysiders host Arsenal before heading to City either side of the New Year celebrations.

Arsenal warmed up for that trip to Liverpool with a disappointing 1-1 draw at Brighton.

Manchester United won back-to-back games under Ole Gunnar Solskjaer thanks to a 3-1 success over Huddersfield, Everton thumped Burnley 5-1, while Fulham drew 1-1 with Wolves and Cardiff held Crystal Palace to a 0-0 stalemate.