Leaders City should tame the Terriers with ease 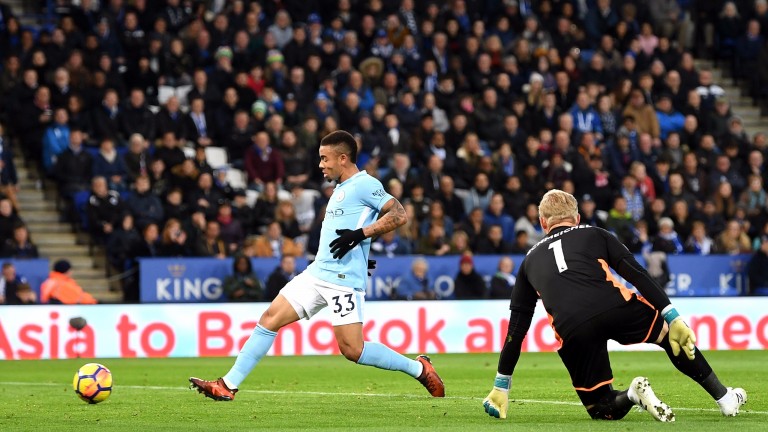 Huddersfield have hosted both Manchester clubs in 2017 without losing to either side but they are likely to be out of their depth against the Premier League leaders this weekend.

Manchester City were held to a 0-0 draw at Huddersfield in an FA Cup fifth-round tie last season. But Pep Guardiola's side are playing to a much higher level this term, having taken 34 of 36 points. Their only hiccup was a 1-1 draw with Everton when they played the entire second half with ten men.

Huddersfield are quite prepared to stand tall against the big teams and sprang one of the biggest surprises of the campaign when defeating Manchester United 2-1 last month.

Having won promotion from the Sky Bet Championship with a negative goal difference, they had been expected to struggle but their high-energy approach has caused problems for plenty of opponents. They have been a tough nut to crack at the John Smith's Stadium, where they have collected 11 of their 15 points.

The big concern for manager David Wagner will be the way they caved in when losing 4-0 at home to Tottenham in September.

If the Terriers play the same way against City, they could be in for an embarrassing defeat.

It is far more likely that they will sit in and try to soak up the City pressure for as long as possible.

The problem with that tactic is that it is the way most other Premier League teams have tried and failed to cope with City.

Guardiola's side face packed defences every week but usually come up with the right answers.

Top-class attacking midfielders David Silva and Kevin De Bruyne are capable of threading the eye of a needle with their precise passing and there is no shortage of movement ahead of them.

Before this weekend's games, four of the top ten goalscorers in the division were City players.

Between them the classy quartet of Gabriel Jesus (nine league goals), Sergio Aguero (eight), Raheem Sterling (seven) and Leroy Sane (six) have scored 30 goals – more than any other top-flight team had managed after 12 rounds of fixtures.

Huddersfield must try to search for a weakness and might see a chink of light in the fact that City's defence which has been weakened by the injury to John Stones.

But putting pressure on the City backline is easier said than done because of how strong Guardiola's side are in midfield.

Huddersfield will have to pick and choose their moments to engage higher up the pitch, as they did in the victory over United.

Wagner can only ask his players to try to replicate that performance but it still might not be enough because City are unlikely to mirror the complacent attitude United showed that day.

They were far from their best when beating Feyenoord 1-0 in the Champions League on Tuesday but Guardiola's teams rarely produce two sub-par performances in a row and should stroll to success on Yorkshire – keeping a clean sheet in the process.

Huddersfield
Christopher Schindler returns from suspension and Kasey Palmer (hamstring) is back in full training but Phil Billing (ankle), Jan Gorenc Stankovic (knee) and Michael Hefele (Achilles) are out.