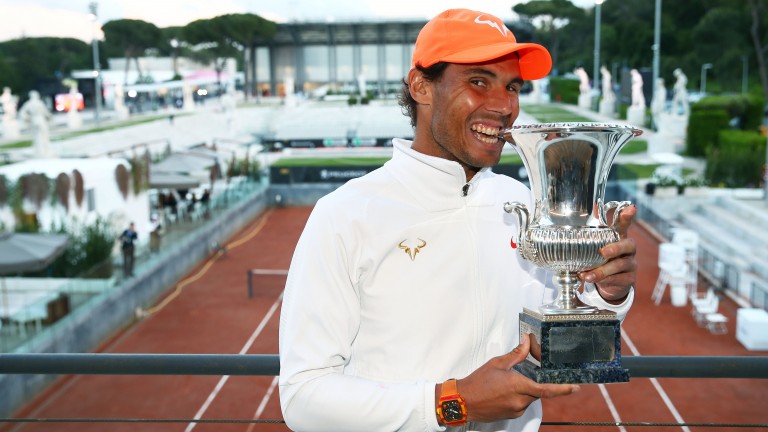 Rome Masters champion Rafael Nadal is all the rage to retain his Roland Garros title
Clive Brunskill
1 of 1
By Adrian Humphries 6:51PM, MAY 26 2019

Rafael Nadal, who will be chasing a 12th French Open singles title over the next two weeks, was the man for money on Friday as punters preferred the look of his draw to that of his chief rivals Novak Djokovic and Dominic Thiem.

The even-money about Nadal, victorious over Djokovic in the Rome Masters final last Sunday, was fast being gobbled up and it looks as if the Spaniard, whose first two matches are due to be against qualifiers, may well start the clay-court major as an odds-on chance.

Simona Halep is the clear 4-1 favourite to retain her women's singles title at Roland Garros despite not having had the best preparation for the second Grand Slam event of the season.

However, top seed Naomi Osaka is in a tough quarter of the draw along with Ashleigh Barty, Serena Williams, Madison Keys and early punters prefer Halep's chance even though her second quarter also includes Petra Kvitova and Aryna Sabalenka.

Karolina Pliskova, seeded second, and fifth-ranked Angelique Kerber will probably be happy with being drawn in the weak-looking fourth quarter.

It's finals day in the clay prep events and Felix Auger-Aliassime is set to play Benoit Paire in an exciting trophy match in Lyon.

Dayana Yastremska, who has been in superb nick all week, meets Caroline Garcia in Strasbourg, while moody top seed Yulia Putintseva will face the increaingly impressive Tamara Zidansek in Nuremberg.

FIRST PUBLISHED 8:01PM, MAY 24 2019
It looks as if Nadal, whose first two French Open matches are due to be against qualifiers, may well start the clay-court major an odds-on chance