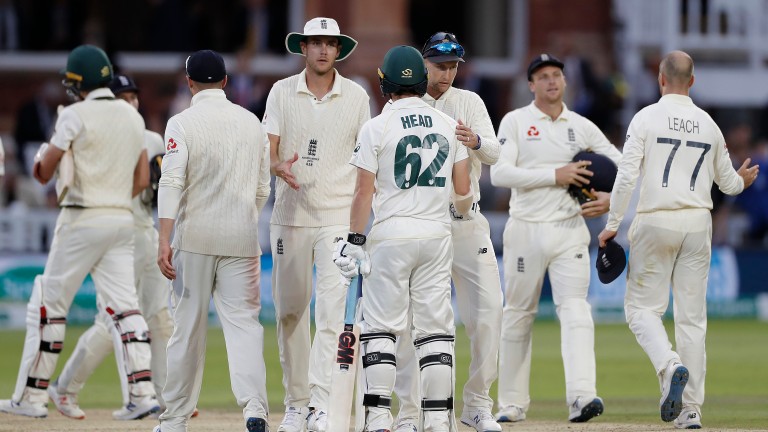 England fielders and the not out Australian batsmen shake hands when the Lord's Test ended as a draw
Getty Images
1 of 1
By Graham Woods UPDATED 9:08PM, AUG 18 2019

Australia are 5-6 from 4-6 to win the Ashes after the second Test at Lord’s ended in a draw on Sunday, leaving the Aussies holding on to a 1-0 series lead.

The draw had been odds-on favourite from the start due to the bad weather forecast, and rain washed out the entire first day.

England started the final day on 96-4 but a towering knock of 115 not out from Ben Stokes gave England some hope as they reached 258-5.

They declared to leave themselves 48 overs to try to bowl Australia out with a lead of 266.

And they made an early breakthrough as Jofra Archer took the wickets of David Warner and Usman Khawaja to pin the Aussies on 19-2.

England went as short as 3-1 for victory at that point, with the draw out to 2-7, but although more wickets fell, time was against England and the match drifted to a draw.

The tourists had to bat ­without Steve Smith, who hit centuries in both innings of the first Test, but was stepped down over concussion fears after he was struck by an Archer ­delivery in their first innings at Lord’s.

The third Test starts at ­Headingley on Thursday with Coral making Joe Root's Three Lions 10-11 favourites, Tim Paine's men 11-8 to take a 2-0 lead and another draw 11-2.