Langer can put on another Porthcawl masterclass 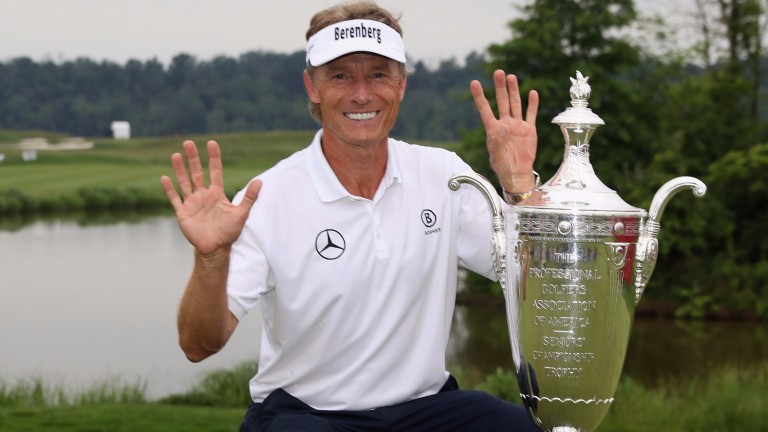 Bernhard Langer made it nine Major success with the Senior PGA Championship in May
Rob Carr
1 of 1
By Jeremy Chapman 8:00PM, JUL 25 2017

Three years ago, when the Senior Open went to Royal Porthcawl for the first time, Bernhard Langer played golf at an entirely different level to anyone else and won by 13 shots from Colin Montgomerie.

That was the year Monty won two senior Majors and was favourite to win a third, so the magnitude of the German’s achievement should not be underestimated.

Since then, Langer has passed Jack Nicklaus’s record number of senior Majors and will reach double figures if he knocks this one off as well.

He looked a sure thing to reach ten a couple of weeks ago when leading the Players Championship by one with two to play. Then the nerves played up – he hit his tee shot into the water at 17 and missed a short bogey putt, and at the 18th a short birdie putt that would have put him into a play-off didn’t drop either.

It was all very un-Langer-ish, but will it come back to haunt him on these famed Welsh links? Or will he draw on his past Porthcawl dominance to repeat the eclipse of a field that includes fellow Masters winners Fred Couples, Ian Woosnam, Sandy Lyle and Sir Nick Faldo?

Yes, that’s right. Faldo has got the mothballs out of his golf bag to challenge the world’s best after a warm-up at the US Senior Open. He missed the cut from in that but only by one, shooting a highly respectable 69-73 for 142.

Nothing would please the Welsh crowd more than seeing Woosnam win but it looks unlikely on this year’s results. Woosie won once on the US senior circuit two years ago but has drawn a blank since and his highest Champions Tour finish this year was 25th.

The years have been kinder to Couples, still a majestic golfer and a winning one. Boom Boom’s two victories from just six Champions starts this year make him a danger to all.

He is still competitive enough to have finished in the top 20 at the Masters, and he loves Porthcawl even though he was only 13th there in 2014, 22 shots behind Langer.

Miguel Angel Jimenez was eighth that week but isn’t quite the player he was, while Scott McCarron benefited from Langer’s mistakes at the Players to bag his first Major. It was a second victory this year for the Californian who finished runner-up to Paul Broadhurst in last year’s Senior Open at Carnoustie.

Broadhurst has used that victory to play a full schedule in the States. He has only two top-fives to show from 12 starts but there was no fluke about the Walsall man’s 50-1 Carnoustie triumph and he has no problem with links golf.

The 45-1 about Broady retaining his title is generous in a field lacking two or three of the bigger names and he’s not the only Brit with a chance. Philip Price, as Welsh as they come, is a new name on the over-50 circuit and has just posted his first win, in Germany.

It must be a dream come true for the quiet man from Pontypridd to have the Open in his beloved Wales. The last time he was on such a big stage, his unexpected Ryder Cup win over Phil Mickelson turned defeat into a European victory at The Belfry in 2002.

An ankle injury cost Montgomerie two months of the year and he has struggled to get back to the form that won him three senior Majors in 2014-15.

Monty had not looked like winning anything but sixth place at the Players last time out was a step in the right direction. The locals love him for captaining the winning Ryder Cup team on Welsh soil in 2010 and it would come as no surprise to see him contending.

Americans Tom Lehman, Jerry Kelly and Steve Flesch are other potential threats but it is very hard to look beyond a man who won by 13 the last time he played the course and shows little sign of losing his grip with the passing years.

Where to watch On Sky Sports Golf from midday Thursday

Course overview Just one great hole after another – so said
five-time Open champion Tom Watson. Exposed to the wind, it is a true test and one of the most highly-regarded British links. Became an 18-hole course in 1895, hosted Senior Open for the first time three years ago when Bernhard Langer won by 13 shots.

Weather forecast Cloudy but dry start with rain arriving on Friday, more severe on Saturday but should subside for the final day. Temperatures around 18C all week with winds 15-18mph.

Type of player suited to challenge Nothing fancy is required to play this honest test, just hard graft and ability to read the wind.