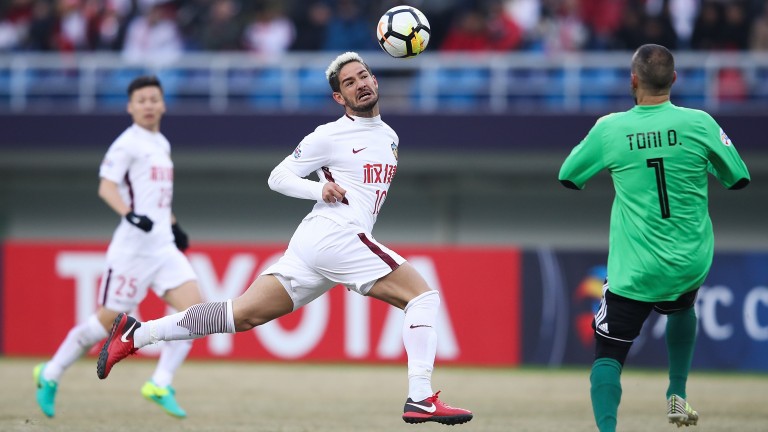 Alexandre Pato has been in prolific goalscoring form for Tianjin Quanjian
Lintao Zhang
1 of 1
By Steve Davies UPDATED 8:04PM, AUG 27 2018

Strong at home but short of goals, Kashima Antlers can avoid defeat against Tianjin Quanjian in the first leg of their AFC Champions League quarter-final tie but punters should be wary of backing them to win at short prices.

Go Oiwa’s men are the lowest scorers of the eight sides left in the competition having found the net just 12 times in their eight ties.

They didn’t win their group, finishing as runners-up behind Suwon Samsung Bluewings, and they drew their home games against Sydney and Shanghai Shenhua.

In the last 16 they beat Chinese Super League highflyers Shanghai SIPG 4-3 on aggregate – winning at home and losing away – but they don’t carry enough of a goal threat since Mu Kanazaki’s exit to justify support at such short odds.

The Antlers aren’t pulling up trees in the J-League but the same is true of Tianjin in the Super League. Both teams have a first Champions League semi-final in their sights and it’s clear where their priorities lie.

Tianjin, managed by Paulo Sousa, were runners-up in Group D and are adjusting to life post-Axel Witsel after the Belgian midfielder's departure to Borussia Dortmund.

Alexandre Pato is in a rich vein of form – the Brazilian has failed to score in only three of his last 11 matches – and is the type of striker Kashima crave.

This showdown could prove to be far tighter than the odds suggest and it may well end all-square.