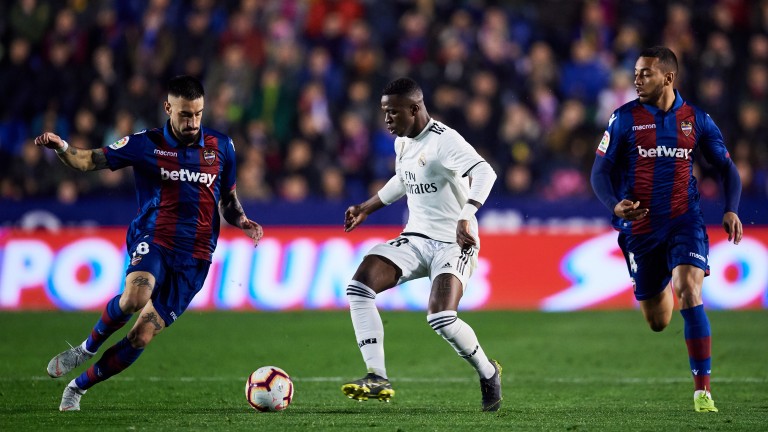 Matches involving Real Betis tend to live up to expectations and there should be plenty of drama when they take on Valencia in Seville.

Both teams have scored in Betis' last five games, including in showdowns with Barcelona and their noisy neighbours Sevilla, while the net has bulged at both ends in six of Valencia's last eight on the road.

Villarreal still have work to do to guarantee Spanish top-flight football for next season but they can move one step closer to survival with victory over Leganes.

The Yellow Submarine, who made the quarter-finals of the Europa League, are clearly better than their current position and they should have too much firepower for the visitors.

Athletic Bilbao have fared well against the big guns this term and should fancy their chances of earning at least a point in the Spanish capital.

They held Real Madrid in the reverse fixture, drew home and away with Barcelona and have claimed the scalps of Atletico Madrid and Sevilla this season.

Zinedine Zidane is struggling to work his magic as an unimpressive season fizzles out and Los Blancos, who have won one of their last three games, could struggle to see off the Basque outfit.

Key stat
Real Madrid have lost four matches at home in the league this season.

A run of one win in five matches has hindered Getafe's pursuit of a top-four finish in La Liga and Sevilla can put a massive dent in their Champions League hopes with victory at the Coliseum Alfonso Perez.

The Andalusian outfit are hitting a rich vein of form at just the right time, seeing off top-four hopefuls Alaves and Real Betis in a run of five wins in six matches.

They can strengthen their top-four claims by taking maximum points.

Levante and Espanyol have little to play for in La Liga and backing goals in their early clash could be the way to go.

Both teams have scored in each of the away side's last three fixtures while Levante's combination of fluid attack and leaky defence has seen them involved in some humdingers.

Their last four matches have featured 17 goals, inclusing a pulsating 3-2 defeat at Bilbao, and a wager on both teams to score and over 2.5 goals could be the best approach.

Key stat
Both teams have scored in eight of the last 11 meetings between these sides.