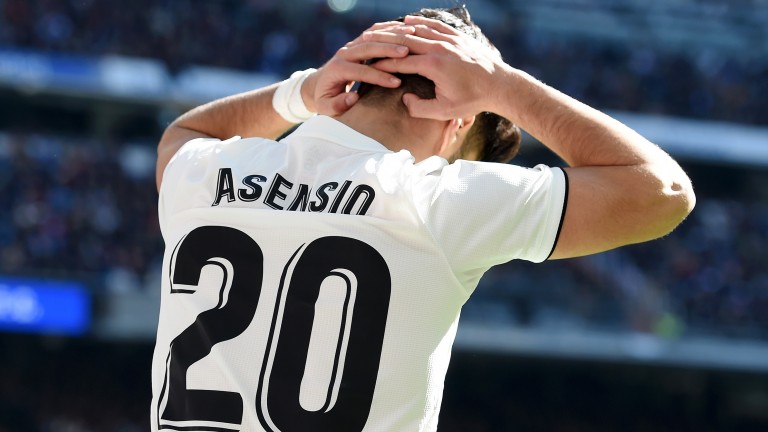 Marco Asensio's Real Madrid will be hoping to bounce back from their defeat to Girona
Denis Doyle
1 of 1
By Racing Post Sport 8:00PM, FEB 23 2019

Eleven Sports from 11am Sunday

Real Madrid's pursuit of Barcelona was suffered a severe blow when they were shocked by Girona last week but Los Meringues had been on an excellent run and should return to winning ways against Levante.

The hosts have been beaten 6-2 by Sevilla and 5-0 by Barcelona at home this season and, while usually tough to beat, often tend to fall short against La Liga's leading lights.

Key stat
Real Madrid have scored at least two goals in each of their last four league away games.

Beaten by a Lionel Messi penalty last week at Barcelona, Valladolid paid once more for the lack of a cutting edge. Sergio’s side are the lowest scorers in La Liga and have netted just ten in 11 matches on home soil.

Even poor travellers Betis, licking their wounds following a Europa League exit at the hands of Rennes, would hope to avoid defeat.

Key stat
Betis have kept only one clean sheet in their last 12.

The re-hiring of Javi Calleja has worked wonders at Villarreal, who are unbeaten in five since he came back to the Ceramica.

They are still in trouble at the wrong end of La Liga and will find it hard going in Madrid, where Atletico saw off mighty Juventus on Wednesday night.

Key stat
The last five meetings between these sides in Madrid have produced just five goals.

Valencia are unbeaten in eight and have scored exactly two goals in each of their last three away games, one of which was at Barcelona.

Leganes, however, have had a week off and are unbeaten in 11 at home, a sequence which includes triumphs over Barca and Real Madrid plus draws against Atletico and Sevilla.

Key stat
These sides have met seven times since 2016 – Valencia have won six with one draw.