Who will reign in Spain? Barcelona odds-on to see off Real Madrid in La Liga

Granada & Real Sociedad among the league's overachievers in 2019/20 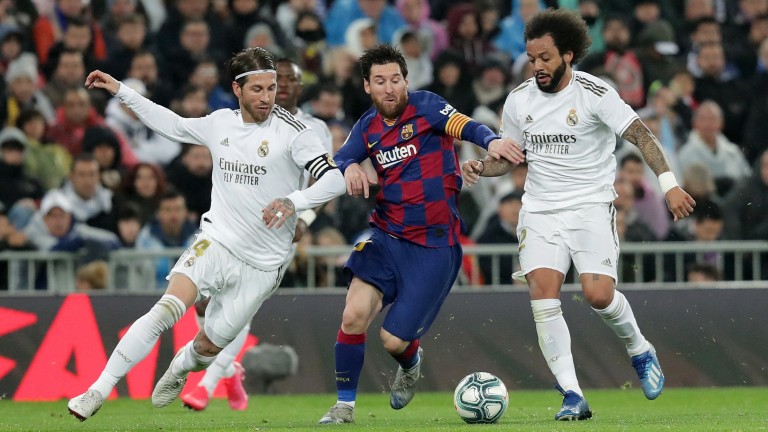 Real Madrid won the battle when they prevailed 2-0 in March's El Clasico clash but Barcelona are on course to win the war.

The two rivals will not meet again in La Liga season but as Spain's premier football division prepares to resume, their title tussle is what everyone is talking about.

With 11 league fixtures remaining, Barcelona hold a two-point lead over Real Madrid in the standings and bookmakers largely expect them to get the job done. The Catalan club are a best-priced 8-13 to win the title while their pursuers are rated 6-4 to come out on top.

Real, who will play their remaining home games at their flashy training complex, have not dropped below fifth spot all season and lost only three times.

Barca, meanwhile, endured a turbulent start, losing to Athletic Bilbao on the first night of the season and taking until mid-October to reach top spot.

But since they went top of the pile they have hardly faltered, occupying first position for 15 of the last 19 matchdays.

A front three of Antoine Griezmann, Lionel Messi and Luis Suarez, supplemented by the occasional appearance from teenage sensation Ansu Fati, has seen them become without doubt the most devastating attacking unit in the division, scoring 63 goals in 27 matches.

Do not let the emergency deal for Leganes striker Martin Braithwaite in January fool you - Barcelona's success this season has been borne out of their killer instinct in the final third.

That is, however, exactly what has been lacking for Real Madrid and will perhaps be the reason they will go a third straight season without winning La Liga.

Defensively they have been superb, conceding only 19 goals in 27 games, with Sergio Ramos, Raphael Varane and Dani Carvajal first-team regulars.

At the other end of the pitch, €100-million wide player Eden Hazard has had his maiden season plagued by injuries, Gareth Bale seems a permanent fringe player and Luka Jovic is a 22-year-old still adjusting to playing under a big-club mentality.

That has left veteran Karim Benzema to shoulder the goalscoring burden and, so far, it hasn't been enough.

But as we edge closer to the season's resumption, there could be an air of optimism around the capital.

Barcelona are sure to drop points in the next couple of months but can Real Madrid capitalise or will the same old problems surface?

Granada, promoted to La Liga last season, would have easily secured the tag of the division's biggest overachievers had they maintained their early season form which saw them as high as sixth in November.

A run of poor results at the end of 2019 has, however, seen them drop down to the mid-table positions.

Beyond them, Real Sociedad have to be considered over-achievers this season. The Basque outfit finished ninth last term but are in hot pursuit of a Champions League berth under Imanol Alguacil.

The youthful side, which includes star playmaker Mikel Oyarzabal, Alexander Isak and Martin Odegaard, have claimed the scalps of Atletico Madrid, Valencia and rivals Athletic Bilbao this season and have reached the final of the Copa del Rey.

Espanyol's spectacular collapse from Europa League qualification with a seventh-placed finish last season to La Liga's basement boys is one of the campaign's most enigmatic talking points.

The club have sacked two managers this season - David Gallego and Pablo Machin - and current boss Abelardo still has his work cut out with the club six points from safety.

The decisions to sell key players at both ends of the pitch in centre-back Mario Hermoso, who went to Atletico Madrid, and Borja Iglesias, who moved to Real Betis, may be reflected on with a strong sense of regret.