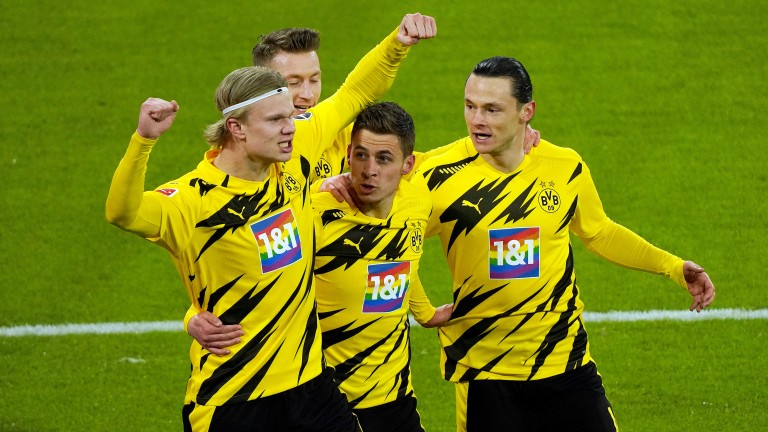 Camp Nou plays host to a crucial six-pointer when leaders Atleti take on third-placed Barca this weekend with Diego Simeone's men set to show why they have been the division's pacesetters for most of the campaign.

The El Clasico clubs have eroded Atletico's lead since the turn of the year but the capital outfit have been top of the pile since November and are rated a best-priced 13-8 to go all the way.

They have lost only three of their 17 away fixtures in 2020-21 and should have the edge against a Barcelona team who still lack the defensive resolve in bigger contests.

Ronald Koeman's men lost to Real Madrid last month despite seeing 69 per cent of the ball, lost the reverse fixture with Atletico earlier in the season and suffered harrowing losses to PSG (4-1) and Juventus (3-0) in the Champions League this season.

In these kinds of matches, stubborn defences often prevail and an Atletico side who have let in only 22 La Liga goals all season look a great selection in the draw-no-bet market.

Bayern Munich can wrap up the Bundesliga title with two games to spare this weekend but there is still plenty to be sorted elsewhere in the division, including who will finish in the Champions League places.

Borussia Dortmund's top-four credentials will be put to the test when they take on Leipzig in the league five days before the sides are due to clash in the German Cup final.

Edin Terzic's men are on a run of five wins from their last six games - their only defeat in that run was against juggernauts Manchester City in the Champions League - and given they are fifth and only two points off third spot, they will throw everything they have at this contest.

Leipzig will almost definitely be prioritising the cup final as they have all but secured second spot in the Bundesliga already.

And even before the news that Julian Nagelsmann will be leaving the club this summer, Leipzig had looked a little shaky, winning only three of their last six games.

With questionable form and a lack of incentive, they are worth opposing when they travel to the Signal Iduna Park.

Strasbourg can edge closer to safety

It is by no means the most glamorous tie of the weekend but Strasbourg can secure an important win in the context of the Ligue 1 relegation battle when they take on Montpellier this weekend.

Montpellier are on course for a top-half finish but with a French Cup semi-final against PSG on the horizon, they have looked distracted in the league, losing their last two fixtures with Nice and St-Etienne.

Their priority is surely advancing to the cup final whereas Strasbourg need all the points they can get to ensure they are not sucked into the battle at the bottom.

They put in a solid shift against Marseille last time out, having led in that game until the 86th minute but they still earned a valuable 1-1 draw.