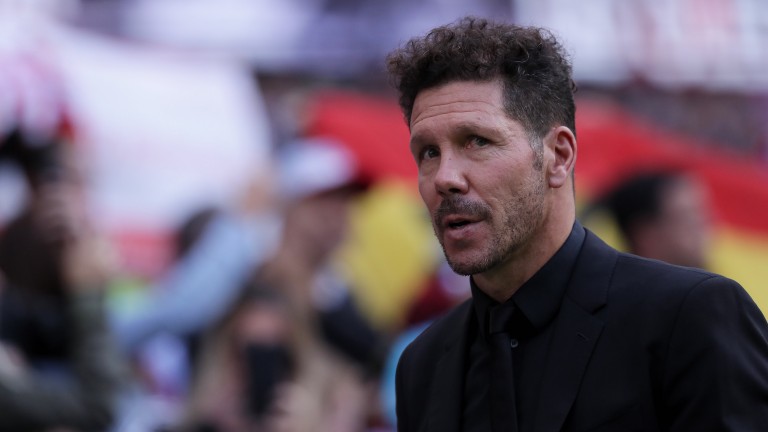 Diego Simeone's Atletico Madrid may not have things all their own way
Gonzalo Arroyo Moreno
1 of 1
By Rob Sutton 4:25PM, DEC 13 2019

Atletico Madrid safely secured their passage to the last 16 of the Champions League on Tuesday and attention now turns to improving their domestic form.

Diego Simeone's side have been drawn eight of their 16 matches in La Liga and sit outside the European places. Their 1-0 defeat to Barcelona two weeks ago was their first home defeat in nearly a year.

Osasuna's run of one defeat in seven matches has propelled them into the top half of the table. They were resilient in their last outing in a 1-1 draw with Sevilla, where they played much of the second period with ten men.

They will prove a tough nut to crack for an Atletico Madrid side who will want to get a couple of wins on the board before the winter break.

Atletico Madrid's total of 16 goals in 16 games is the lowest at this stage of the season in Diego Simeone's time in charge.

Athletic Bilbao saw their five-match unbeaten run come to an end at Real Betis last weekend, but Gaizka Garitano should be confident his side can return to winning ways when they face one of his former clubs Eibar.

Bilbao are on the fringes of the Champions League places and their campaign has been built around a strong home record with Valencia being the only side to have picked up three points at San Memes.

Eibar are falling towards the relegation zone having lost their last four matches. While defeats to Real Madrid and high flying Real Sociedad were not a surprise, the home defeats to Alaves and Getafe will have caused concern.

Eibar are on their worst run of results since their first season in La Liga in 2014-15.

The middle of La Liga table is somewhat compact. Fourth-placed Real Sociedad are only eight points ahead of Valladolid in 14th and two teams involved in the battle clash at Los Carmenes.

Granada have made a really good return to La Liga and their
3-0 success over Alaves last weekend was welcome after five games without a win.

Levante are struggling away from home with just two wins all season and they have conceded four goals in each of their last two matches. Another tough afternoon looks in store.

Granada have conceded only four goals at home this season - the second-best record in La Liga.