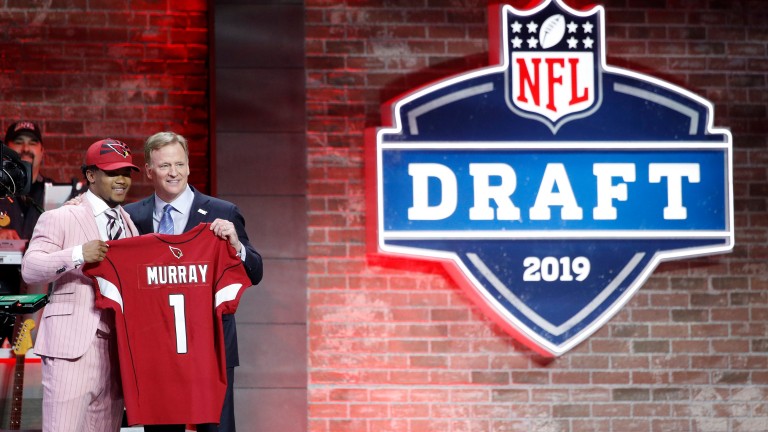 Kyler Murray poses with NFL commissioner Roger Goodell after being announced as the first pick in the first round of the NFL Draft
Joe Robbins/Getty Images
1 of 1
By Phil Agius 3:12PM, APR 26 2019

The first round of the 2019 NFL draft didn't have as many surprises as the 2018 version.

While Oklahoma quarterback Baker Mayfield had been a 20-1 shot to go first just days before he was selected by Cleveland in 2018, Kyler Murray, his successor with the Sooners, was favourite to be picked first by Arizona on Thursday night and was duly selected by the Cardinals.

Murray survived a drift from 1-4 to 4-9 as late support came for defensive tackle Quinnen Williams to be heading to Tempe, but in the end the first three picks followed market expectations with pass-rusher Nick Bosa going to San Francisco with the second pick and Williams grabbed by the New York Jets with the third choice.

The first surprise came when the Oakland Raiders used the first of their three first-round picks on defensive end Clelin Ferrell at four, but the most controversial choice of the night was made by the New York Giants.

With QB Eli Manning entering his twilight years, the Giants picked Daniel Jones to be their quarterback of the future with the sixth pick, when he might easily have been available with their second selection at 17.

Giants fans watching at MetLife Stadium greeted the announcement with boos. The Giants are 100-1 with RedZone for the Super Bowl this season and 14-1 outsiders with bet365 to win the NFC East.

Super Bowl champions New England Patriots used the final pick of the round to nab wide receiver N'Keal Harry. They are 15-2 favourites to retain their title.

The draft continues with rounds two and three on Friday and rounds four to seven on Saturday.