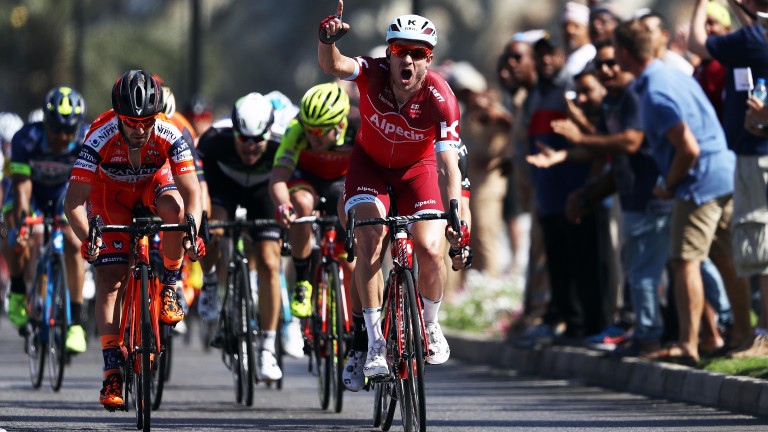 Marcel Kittel stamped his authority on another sprint finish as the Tour resumed on Tuesday, easily landing his fourth stage victory to keep him extremely comfortable in the green jersey.

After a couple of tight finishes last week, Kittel scored his most straightforward victory so far to move to 13 overall in his Tour career. His rivals appear to have no idea how to beat him and the big German is so confident he has given up on the traditional concept of the lead-out train and simply picks his moment to strike from off the pace.

This latest stage win in Bergerac gave Kittel another 50 points in the green jersey competition, with main rival Michael Matthews only 13th, and he also scored well at the intermediate sprint to stretch his points lead to 102 – up from 52 at the start of the day.

From 4-11 before the stage, Kittel is now no bigger than 1-7 to win the points classification and Matthews is out to a general 6-1 (from 5-2). There will be chances for the Australian to close the gap again on the intermediate stages that lie ahead, but like all the rest of the fastmen he appears to be fighting a losing battle.

Kittel has another big opportunity at the finish of stage 11 in Pau, although even some of the sprint teams may decide to switch their focus to breakaways rather than aiding the Quick-Step team in bringing the race back together for the almost inevitable Kittel win.

Pau is the third most visited town in Tour history and this will be the 59th stage finish at the gateway to the Pyrenees, which loom large for Thursday’s day of climbing. The roll of honour in Pau includes Tour legends Fausto Coppi and Bernard Hinault, as well as other big names such as Sean Kelly, Pedro Delgado, Claudio Chiappucci and Erik Zabel, and this is a prestigious place to win a stage.

The approach roads play a big part in determining what type of rider can win in Pau – French breakaway specialist Pierrick Fedrigo took victory on the last two visits in 2010 and 2012 – and there is a good chance of a sprint this year with only one category-four climb on the route, almost 60km from the finish.

While Kittel was undisturbed at the front on Tuesday, the jockeying for position behind him brought some different names into the places in Bergerac with John Degenkolb second and Dylan Groenewegen third.

The best that either rider had managed before was fifth and it is clear that tiredness and the depletion of the sprint ranks has widened the competition for places.

That opens up some possibilities for a decent-priced alternative to the odds-on Kittel, and Groenewegen may now show up more having looked a little out of his depth in the hurly-burly of the first week.

Alexander Kristoff still looks a solid each-way choice despite mistiming his effort on the tricky finish in Bergerac and he is worth trying again. He has the experience to make sure he is in the right position this time and, in the event of Kittel making a mistake, is one of the few who is a proven winner at this level.