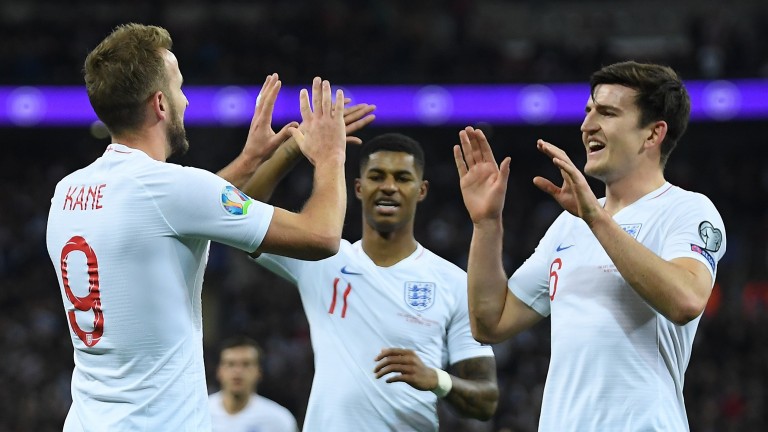 Kosovo
Striker Vedat Muriqi had to withdraw from the squad due to an injury.

England
Raheem Sterling is set to return but Jordan Henderson (virus) and Joe Gomez (knee) have withdrawn from the squad.

England have provided bags of entertainment in Euro 2020 qualifying and are likely to sign off with another high-scoring victory over Kosovo in Pristina.

,But Kosovo, who were seeded fifth in the section and are guaranteed to finish third, can look back on their campaign with plenty of pride.

They went into the last round of matches without injured striker Vedat Muriqi, their top scorer in qualifying with four goals.

Muriqi's replacement, towering Sheffield Wednesday forward Atdhe Nuhiu, gave them a 50th minute lead against the Czechs but they were unable to hold out against strong opposition, who maintained a 100 per cent home record.

There is a second chance for Kosovo, who take part in the playoffs in March 2020, but their immediate priority is to finish off Group A in a positive manner.

Bernard Challandes's side lost 5-3 to England in Southampton in September but won plenty of admirers with a performance full of energy and attacking intent.

Kosovo had spells in the game when they dominated possession but they regularly left themselves open at the back and could have shipped more goals had England been more clinical.

England made basic errors at the back and there is an ongoing debate about their defensive fragility which threatens to undermine the push for glory next summer.

The Three Lions celebrated their 1,000th international with a thumping 7-0 success over Montenegro at Wembley yet there were moments in the game when the defensive problems resurfaced.

In the first half Jordan Pickford had to make a smart save from a header from defender Marko Simic and he came up trumps in a one-on-one situation against striker Fatos Beqiraj.

During qualifying, Gareth Southgate has not had to fix the defensive issues because he has been confident in England's ability to outscore moderate opposition.

And he may take the same attitude to the final match as he looks to finish with a flourish.

Raheem Sterling's likely return is ominous for Kosovo, who are likely to come up against an even stronger England attack than the one which demolished Montenegro.

Harry Kane is also set to feature, having scoring a hat-trick in just 57 minutes on Thursday, taking his international tally to 31 and lifting him six spaces to sixth in the list of all-time England goalscorers.

Tammy Abraham, fresh from his goal against Montenegro, will want to continue making his case for more regular involvement and it would not be a huge surprise if England rack up four goals or more for the seventh time in eight qualifiers.

While a goal glut looks likely, a clean sheet is far from certain.

England got away with loose defending against Montenegro but Kosovo are better equipped to take advantage and can grab a consolation goal in a losing cause.

England have scored four goals or more in six of their seven qualifiers.