Konta’s dream may be about to end against Halep 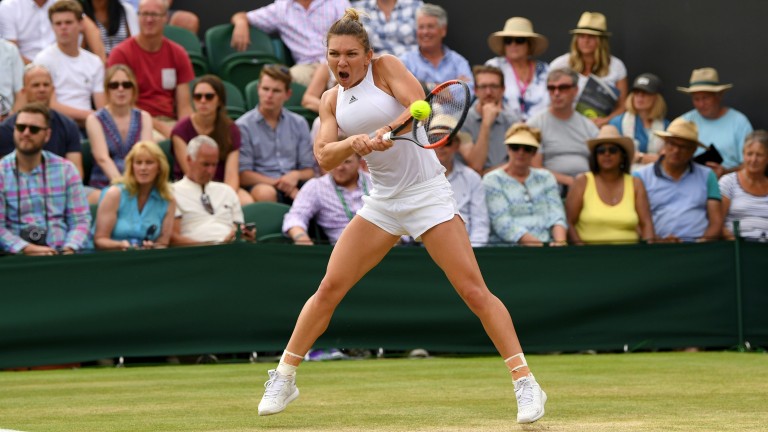 Konta v Halep
Johanna Konta came through another tough match as she downed Caroline Garcia on Court One but the Briton’s Wimbledon dream looks under threat when she faces relentless Romanian Simona Halep for a place in the last four.

Konta has already been taken to three sets by both Donna Vekic and Garcia and she must now prove herself against a player ranked higher than her for the first time in the tournament.

They met in the Miami Open quarter-finals when Konta won in three sets but the Romanian should’ve got the better of her that day, failing to serve out the second set when 5-4 up.

That prompted a temporary split with coach Darren Cahill, who blasted her for giving up in the final set. They reunited soon after and Halep has arguably been the best player on the WTA Tour since, winning the Madrid Open and reaching the finals of the Italian Open and the French Open.

The pair also faced off in the Fed Cup when Halep came out on top in her home town of Constanta but the tie was overshadowed by Ilie Nastase’s actions.

Halep was available at 20-1 at the beginning of the tournament but there’s no reason why the former Wimbledon semi-finalist shouldn’t produce the goods on grass and she has looked every inch a champion in the making when coming through tough third and fourth-round matches against Shuai Peng and Victoria Azarenka with little trouble.

Konta has looked in greater difficulty and the pressure could start to get to the Brit. Halep is a punchy player who relies on her speed around the court. She will keep forcing Konta to play the extra ball and will be hard to put away.

The home hope is joint-favourite to win the title but her charge may come to an end.

Muguruza v Kuznetsova
Garbine Muguruza was forced to produce her best tennis to beat Angelique Kerber in three sets in their fourth-round clash but the Spanish player did just that and she deserves to be favourite to see off Svetlana Kuznetsova and seal a place in the semi-finals.

Kerber looked the likelier of the two to win the match after she took the first set and then on more than one occasion in the third when she managed to break Muguruza’s serve.

But the 2015 finalist showed all her battling qualities to deny Kerber in a match where both players showed their true colours after poor seasons.

Kuznetsova had an easier time of it as she came through in straight sets against Agnieszka Radwanska but the Pole had struggled in a number of matches in week one and the Russian is likely to face a tougher time against a fellow former Slam champion.

Muguruza has a 3-1 winning record over Kuznetsova, with the veteran only successful in their first meeting in Madrid in 2015.

Two of those three Muguruza victories have come in high-pressure environments, once in the fourth round of the French Open that she would go on to win and also in the WTA Finals where she turned things around in the second and third sets to record a comanding win.

If the 2016 Roland Garros champ is in the same form as she was against Kerber, she should win and 4-6 looks on the large side.

V Williams v Ostapenko
Venus Williams faces French Open champion Jelena Ostapenko and despite being a Grand Slam winner, the 21-year-old is in danger of letting her youthful exuberance get the better of her against the veteran.

Ostapenko’s expansive game is big enough to trouble any player but the Latvian fired 39 unforced errors in her fourth round win over Elina Svitolina and she will need to produce winners galore if she is to break down Venus.

Ostapenko is perfectly capable of doing that – she hit 42 against Svitolina – but the exciting youngster lives on the edge and eventually she is likely to be caught out.

The elder Williams sister has looked progressively more confident on grass over the course of her opening four matches. After beating Elise Mertens in the first round, Williams required three sets against Chinese player Qiang Wang in round two.

Since then she has produced improved perfomances against Naomi Osaka and Ana Konjuh and she will need to be at the peak of her powers if she is to stop Ostapenko from taking control of the match.
Bookmakers are struggling to split the pair and this one looks too close to call.

Rybarikova v Vandeweghe
Magdalena Rybarikova may be an unfamiliar name to many but the last unseeded player left in the women’s draw is anything but a no-hoper on grass and she will be hoping to cause problems for American hope Coco Vandeweghe.

Vandeweghe took out fifth seed Caroline Wozniacki yesterday and has shortened up considerably to lift the Venus Rosewater Dish following that result.

This is Vandeweghe’s second quarter-final appearance at the All England Club and the 25-year-old, who is coached by Pat Cash, has the perfect game for grass-court tennis.

The Calfornia girl’s easy-going nature should help her cope with the pressure of the second week of a Grand Slam but she has a 0-2 head-to-head record against Rybarikova and the Slovakian, who dumped out third seed Karolina Pliskova in the second round, should not be underestimated.