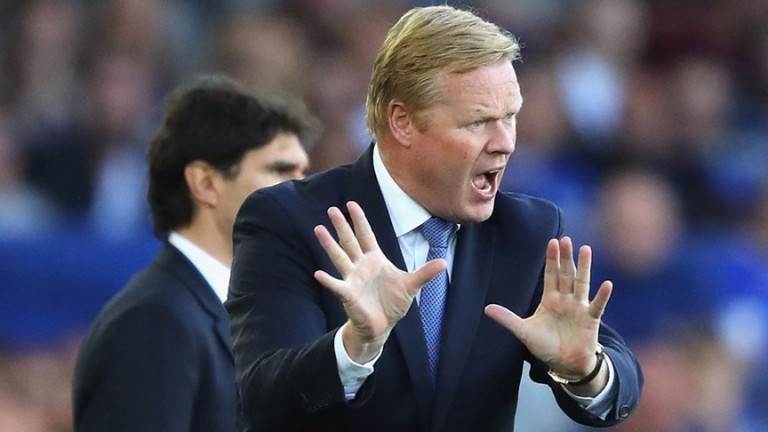 Ronald Koeman returns to St Mary’s for the first time since his acrimonious summer departure to Everton and he can silence the boo-boys by taking a point from the Southampton trip.

Koeman did great things at Southampton, taking them into the Europa League, and many of the fans were upset he decided to leave for the Toffees, especially as Everton finished 16 points behind Saints last season.

Supporters can argue about which is the bigger club and who has more ambition until long into the night, but Southampton should be satisfied as they look to have once again found a suitable replacement for a departing manager with the arrival of Claude Puel.

However, Saints may have to settle for a point for the fourth time in seven home league games as they tend to struggle to put the opposition away and must also quickly recover from Thursday’s Europa League loss in the Czech Republic to Sparta Prague.

That will become even more difficult if influential playmaker Dusan Tadic is once again sidelined. The Serb has sat out five matches this season, and Southampton have scored just three goals in the fixtures Tadic has not started.

Only twice (against Burnley and West Ham) in 12 league games have Saints scored more than once in a Premier League game, while Charlie Austin and Nathan Redmond are the only players to notch more than one top-flight goal.

That makes Saints a risky punting proposition even though they often control matches well and have an excellent defence, with only 12 goals conceded.

Not much ambition was shown in last week’s stalemate with Liverpool but Virgil van Dijk enhanced his reputation with a superb display and a similar performance will almost certainly give Romelu Lukaku a tough 90 minutes.

If Saints rely on Austin for goals the same can be said for Everton and Lukaku, who is the only Toffee to score more than twice in the Premier League.

However, Lukaku has scored in just four of his last 17 Premier League away trips, which is not good enough for a forward who is being spoken about as an elite striker.

Everton have won only one of their last eight games but interestingly the embarrassing 5-0 defeat at Chelsea and the following 1-1 draw with Swansea came while Koeman was without key central midfielders Idrissa Gueye and Gareth Barry.

Gueye was suspended for the Stamford Bridge trip and Barry banned for the Swans clash – when they are paired together Everton have lost just once and that was an extremely unlucky 2-1 reverse at Burnley.

With those two back in tandem this should be a tight, low-scoring contest.

Team news
Southampton
Dusan Tadic is unlikely to figure as he recovers from a broken nose but Southampton are more optimistic Jose Fonte can return. Matt Targett remains sidelined.

Everton
Gareth Barry is back from suspension but Muhamed Besic and Matthew Pennington remain on the long-term casualty list.