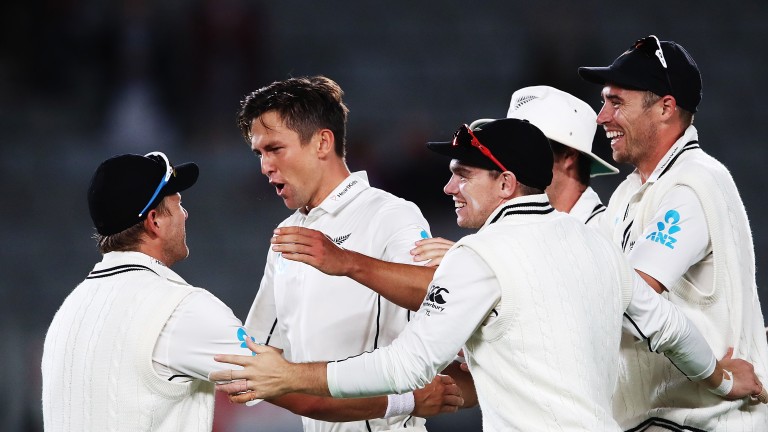 Trent Boult (second left) celebrates one of his nine wickets in Auckland
Hannah Peters
1 of 1
By James Milton UPDATED 11:06AM, MAR 29 2018

England supporters might have hoped the worst was over after a 4-0 Ashes drubbing in Australia but their side's struggles away from home continued in spectacular fashion in the first Test against New Zealand.

Kiwi fast bowlers Trent Boult and Tim Southee bowled out England for 58 on day one of the day-night Test in Auckland and two days of rain only delayed the inevitable as the hosts sealed victory by an innings and 49 runs.

That defeat extended England's woeful away record to nine defeats in ten Tests and, despite the talent in the squad, there is no urge to back them as narrow favourites in the second Test in Christchurch.

New Zealand have won three of the four Tests at the Hagley Oval with Boult (22 wickets), Southee (20) and impressive left-armer Neil Wagner (17) enjoying fine records at the ground.

James Anderson and Stuart Broad should pose a threat for England but their back-up bowling looked toothless in Auckland and, as in the Ashes in Australia, their batsmen were unable to kick on.

Mark Stoneman (55), Joe Root (51) and Ben Stokes (66) put up some resistance in the second innings but it was too little, too late after the first-innings debacle and centuries from New Zealand's Kane Williamson and Henry Nicholls.

Best bets
A two-Test series in New Zealand may not have the box-office appeal of the Ashes but the Kiwis are a terrific side on their own patch.

Williamson's understated celebrations after reaching a national-record 18th Test century last week epitomised his side's calm approach as they rammed home their advantage after a stunning opening day of the series.

Williamson and Nicholls played well-paced and conscientious Test innings, contrasting with the frantic, frazzled shot selection of England's batsmen, and the Kiwis are well worth backing to seal the series 2-0.

Stokes's innings of 66 off 188 balls was the pick of the England batting in Auckland and he looks overpriced to top-score in the first innings.

He wasn’t fit enough to bowl in Auckland so could focus on his batting at number five and, after being bowled for a duck by the brilliant Boult in the first innings, he responded well second time around.

Boult was sensational in Auckland, claiming 6-32 on day one and three more wickets, including the key scalps of Root and Alastair Cook, in the second innings.

His 22 wickets in four Christchurch Tests have cost just 23 runs apiece and he picked up seven wickets in the victory over Bangladesh in January 2017. The 10-1 that Boult repeats his man-of-the-match performance in the first Test merits a small bet.

Venue
Just four Tests have been held at the Hagley Oval, all of them won by the team batting second.

Spin hasn't been a major factor in Christchurch but, ominously for England, Kiwi quicks Boult, Southee and Wagner have shared 59 wickets in those four matches.

Team news
Spinner Todd Astle has been ruled out with a side strain so Ish Sodhi could earn a recall for New Zealand.

Weather
Sunny on days one, three and five with occasional showers on day two and an overcast day four. Highs of 22C.