Kiwis may not fly away from brave battlers Scotland 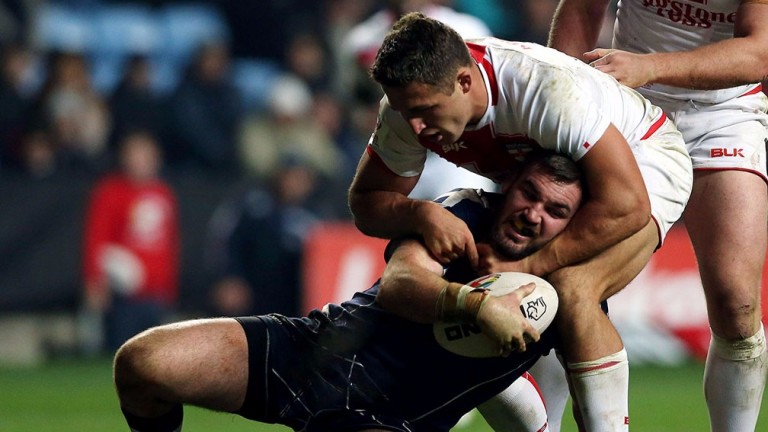 Should England end a decade of disappointment against Australia on Sunday, points difference could decide who makes the Ladbrokes Four Nations final in nine days.

New Zealand are in pole position to join the Aussies at Anfield but they must hold up their end of the bargain and beat Scotland in Workington on Friday evening.

At quotes of 1-100, bookmakers agree that victory is a formality but the Kiwis must defeat Scotland by more than 30 points to set England a points target against Australia.

“The wetter the better” was how Scotland captain Danny Brough described his ideal weather scenario for the match in Cumbria and with an unsettled evening forecast, Brough has got his wish.

That may be good news for the Scots but a wet and windy night isn’t conducive to open rugby league which isn’t favourable to New Zealand’s chances of setting England a target or beating the handicap set by the layers.

The Kiwis are charged with overturning a general 36-point line but judged on the weather and previous performances, Scotland have to be the handicap selection. The Scots were hand­icap victors against Australia in their opening bout and doubled up against England last week with a dogged display.

Scotland stunned England with two early tries in Coventry and were still in the game until the final quarter when the pace of the contest caught up with them. Any inclement weather should slow down the pace of the game in the Scots’ favour, allow­ing them to set their defensive line against a power-packed Kiwis forward unit rather than be caught out by a quick ruck.

The sides have met once before with New Zealand running out comfortable 40-4 winners in the 2013 World Cup quarter-final when a brilliant Kiwis backline were too hot to handle. However, only Shaun Johnson remains from that side and even though coach David Kidwell still has some plenty of strike in his backs, he has opted to rotate his squad this evening.

An unlikely Scotland win would trump anything on the growing list of sporting and political upsets this year and while victory is surely beyond them, they should at least put in another brave performance.
England prop James Graham has been included in Wayne Bennett’s 19-man squad for Sunday’s crunch clash with Australia. The Knights vice-captain will feature after missing the win over Scotland with a knee injury but Bennett has a decision to make at half-back with Gareth Widdop, Luke Gale and George Williams all named in his squad.

Tournament favourites Australia are 1-3 to end the hosts’ chances of making the final with a ten-point handicap line set by bookmakers.