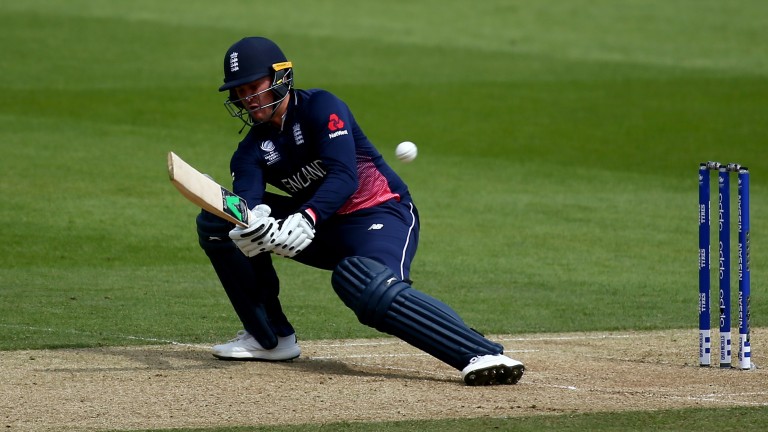 England opener Jason Roy was dismissed for one against Bangladesh
Jordan Mansfield
1 of 1
By James Milton 8:00PM, JUN 5 2017

Champions Trophy
Sky Sports 2, 10.30am
Real Madrid reigned supreme in Cardiff on Saturday night and England's cricketing galacticos will be hoping for a similarly impressive performance in their Champions Trophy clash with New Zealand.

England comfortably chased down 306 to beat Bangladesh in their opening game and they are 1-2 to see off the Kiwis in the Welsh capital.

But New Zealand, runners-up at the 2015 World Cup, relish upsetting the odds at major tournaments and they were in a strong position against Australia at Edgbaston before rain had the final word.

Kane Williamson's century steered the Kiwis to 291 in 45 overs and their bowlers had the Aussies in trouble at 53-3, chasing 235 in 33 overs.

England know all about the quality of New Zealand's bowling as they were skittled for 123 in a miserable defeat in Hamilton at the 2015 World Cup. However, when the teams met again later that year, a pulsating contest ended in a 3-2 England series win.

The Kiwis got rid of David Warner, Aaron Finch and Moises Henriques in the nine overs they bowled at Australia and they will be desperate for early wickets against an England side whose great strength is their batting depth.

Weather permitting, it promises to be an enthralling contest in Cardiff and the early 2-1 about New Zealand proved attractive to punters expecting the Kiwis to pose a serious test of England's trophy credentials.

Best bets
Joe Root's fine century helped England to a regulation win over Bangladesh but there were concerns for the home side at the start of both innings, and the 11-10 that they are outscored by New Zealand in the first 15 overs is an appealing bet.

The reliable Chris Woakes bowled only two overs with the new ball before going off with a side injury that has ended his tournament.

And when England batted, opener Jason Roy was caught for one, trying to manufacture a scoop shot too early in his innings.

That dismissal was a clear sign of Roy's muddled thinking after scores of nought and 20 against Ireland and one, eight and four against South Africa in the build-up to the Champions Trophy.

He has been given a vote of confidence from Eoin Morgan and the management but he must be feeling a little tentative and New Zealand could make the early running.

Luke Ronchi, preferred to the more orthodox Tom Latham at the top of the order, unsettled Australia with 65 off 43 balls and partner Martin Guptill is another destructive hitter on his day.

Boult and Southee are well suited to English - or, indeed, Welsh - conditions and they should be confident of denting a powerful England batting line-up early on.

That points to a small bet on 7-1 chance Ben Stokes to top-score from number five.

The all-rounder wasn't required with the bat against Bangladesh but he bowled seven tidy overs, taking 1-42, despite concern over his troublesome knee.

That injury didn't stop him cracking 101 against South Africa at the Rose Bowl in his last innings before the tournament and he also made a brilliant century for Pune in the Indian Premier League.

He finished last summer's series against Pakistan with scores of 69 at Headingley and 75 in the defeat at Cardiff while in 11 subsequent ODI knocks he has made two centuries, three fifties and an unbeaten 47 to take England home against Bangladesh in Chittagong.

Venue
After several low-scoring, rain-affected ODIs at Cardiff, the last three teams to bat first at the venue all passed 300 and Pakistan chased down 303 to beat England last September.

Team news
Steven Finn, called up to replace the injured Woakes, could come straight into the 11 but left-armer David Willey is another option. Leg spinner Adil Rashid may miss out again.

The decision to open the batting with Ronchi rather than Latham paid off against Australia so the Kiwis could be unchanged.

Weather
Cloudy with showers likely to cause some interruptions in the afternoon’s play, 15C.