Kimi Raikkonen can keep up run of front rows in Baku

Back Bottas to beat Hamilton in qualifying 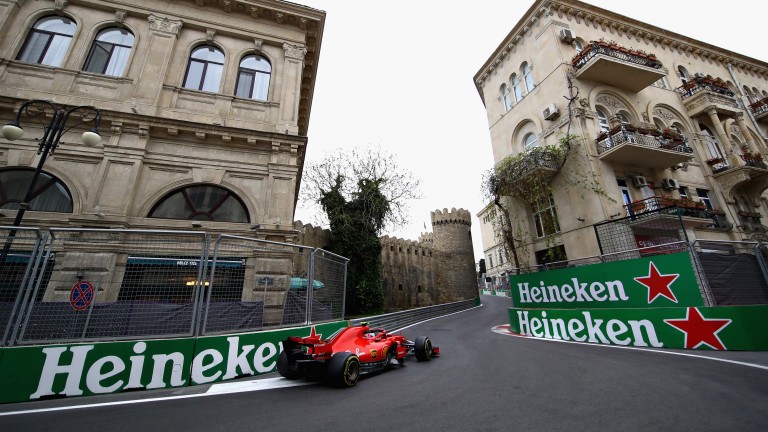 Kimi Raikkonen winds his Ferrari through the streets of Baku
Clive Mason
1 of 1
By Adam Scriven 8:00PM, APR 27 2018

Kimi Raikkonen is the only driver to have started all this year's three grands prix on the front row, and the Ferrari ace is worth backing to keep that record intact in Azerbaijan Grand Prix qualifying.

Chinese Grand Prix winner Daniel Ricciardo set the pace on a promising practice day for Red Bull, a whisker ahead of Raikkonen, although his teammate Max Verstappen once again paid the price for overdriving. The Dutchman completed just 11 laps before hitting the wall in the morning session.

World champion Lewis Hamilton heads the qualifying betting. Although the Briton never threatened to top either Friday session, his Mercedes teammate Valtteri Bottas was fastest in the morning, 0.03 seconds ahead of Ricciardo.

Bottas sits five points behind Hamilton in the championship but that has a lot to do with his qualifying mistake in Australia which led to him starting down the field at a track where overtaking is tough.

Since then, the Finn has twice outqualified Hamilton, finished a close second to Sebastian Vettel in Bahrain and would probably have won in China were it not for the appearance of the safety car.

Hamilton is second in the championship but has not looked himself so far this season and could prove the wrong favourite in a qualifying matchbet against his teammate.

Championship leader Sebastian Vettel was also down the order after several trips down the escape roads in his Ferrari.

Mercedes and Ferrari will crank up the power for qualifying and on a circuit that features a 1.4-mile long straight that will probably be enough to peg back the Red Bulls.

The signs are promising that Sunday will provide another close race in which strategy could again play a decisive role.