Kim can continue to cause Van Barneveld problems 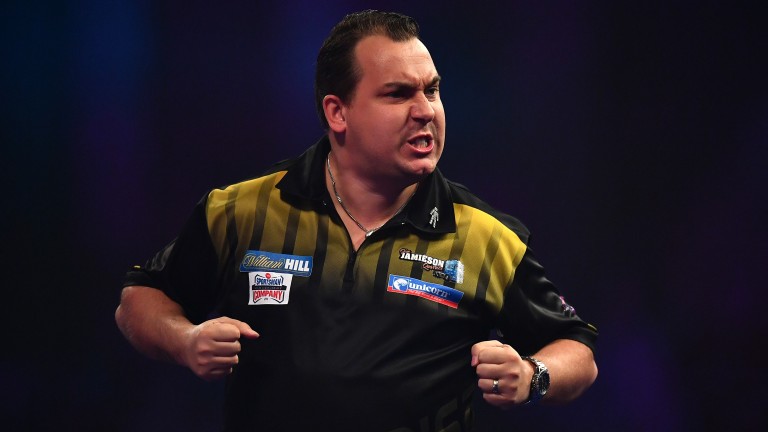 Lewis v Chisnall
Head-to-head: Chisnall leads 14-10
Dave Chisnall found his way to the top of the 180s chart in week one of the Betway Premier League but also to the bottom of the table, and that spells danger going into his second game against Adrian Lewis.

Big-scoring Chizzy chucked in five maximums and a 160 finish yet still contrived to lose 7-3 to an out-of-sorts Phil Taylor last Thursday, and he’s immediately playing catch-up.

He’s a streak player so when Chisnall is struggling on stage it could be worth milking it and Lewis looks a fair bet at 6-5 at the Motorpoint Arena in Nottingham.

Lewis himself lost last week, but it could be a blessing for backers. Having blown it from 4-1 up against Barney, surely Jackpot will stay focused for the duration of the match tonight.

Wade v Taylor
Taylor leads 50-12
Phil Taylor went to the top of the Premier League table on night one – and still didn’t budge in outright betting.

A lacklustre 7-3 win against Dave Chisnall impressed nobody but The Power will be better for the run, especially as he is hardly playing any competitive arrers these days. He swerved, for example, all three Coral UK Open qualifiers at the weekend.

He will still be a warm order because a decent Taylor would beat a decent James Wade nine times out of ten.

However, Wade can lift his game and this match could easily go the distance.

One bet to look at is most 180s. Taylor was noticeably erratic last week, hitting fives and ones, and goes downstairs more than any other darter. All of which restricts his chances of piling up maximums, whereas Wade is consistently straighter. The leftie looks overpriced at 15-8.

Klaasen v Anderson
Anderson leads 12-6
Gary Anderson has won eight in a row against Jelle Klaasen and, if he maintains his form of recent months, tonight will be number nine.

However, Klaasen is a streaky player and such a power scorer that he will be a hard man to break.

He took Peter Wright to 11 legs last Thursday after Anderson and Michael van Gerwen had gone the distance. This one could run as well.

Wright v Van Gerwen
Van Gerwen leads 42-9
Peter Wright ended a 16-match losing streak against Michael van Gerwen when he beat the Dutch world number one in a UK Open qualifier, but this fixture has basically become a mismatch.

Snakebite is a class act who has soared up to third place in the PDC’s rankings – but he also seems to bring out the best in Mighty Mike. Last year’s two Premier League showdowns between them ended in 7-2 routs to the world champion.

Expect Van Gerwen’s dominance to resume but the best bet could be the 8-11 that he hits more maximums than the Scot.

K Huybrechts v Van Barneveld
Huybrechts leads 9-2
It is the most remarkable head-to-head stat in this year’s Premier League – Kim Huybrecht’s 9-2 lead over Barney – and suggests that you write him off at your peril.

Granted, the last four meetings have been shared, but the Belgian boasts an 82 per cent win rate against the former world champion.

Raymond van Barneveld should have lost last week only to be gift-wrapped the points by Adrian Lewis.

And Huybrechts averaged over 100 in a luckless defeat by James Wade.

If you fancy the outsider, Huybrechts +1.5 on the handicap is an 11-10 chance so you may prefer the 6-5 Huybrechts-draw double chance.