Kim and Kisner set to pile pressure on Poulter

Early start in South Carolina with storms due 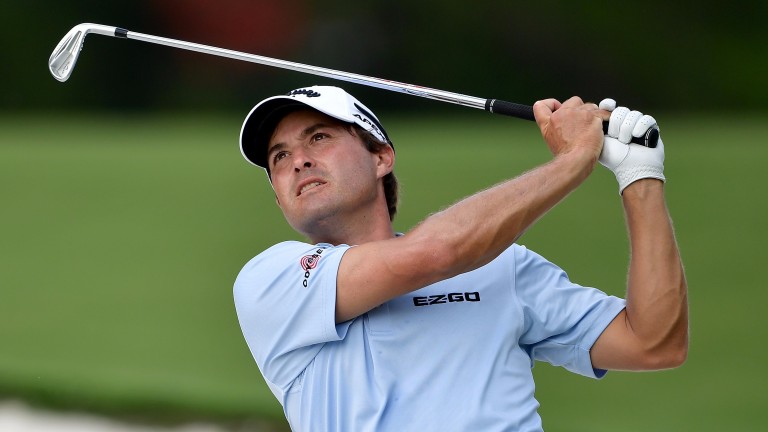 Story so far
Bryson DeChambeau carded a miserable 75 to drop from first place to 20th in the Heritage third round, while Ian Poulter fired a 67 to take over pole position at the Harbour Town Links, South Carolina.

Poulter, a 50-1 chance ante-post, is one shot clear of Luke List and Si Woo Kim. Poulter won the Houston Open at the start of this month and has found tremendous form with the putter he used so effectively in the 2012 Ryder Cup.

List is chasing his maiden US Tour title, while reigning Sawgrass champion Kim is seeking a third Stateside triumph. Poulter has won three times on the US Tour, but only one of those (Houston) was a strokeplay event in the States.

Final-round tee-times have been moved forward in a bid to avoid impending thunderstorms. The players are out in threeballs, with the leaders scheduled off at 2pm.

Final-round advice
Ian Poulter has revived his career over the last few weeks, digging his 'magic putter' from the back of the garage and holing with similar confidence to that which he had at the Miracle of Medinah.

Poulter, who appeared to be a fading force in his early 40s, has become a force to be reckoned with again in low-grade US Tour events like the Heritage.

A year ago, Poulter entered this event ranked outside the top 200 of the world, but he is up to 31st for this edition of the Heritage and riding the crest of a wave.

Poulter is unlikely to be wrested easily from his perch – the Harbour Town Links is the sort of track on which he can be extremely competitive – but 5-2 is an unattractive price given how many players are in close pursuit.

Anyone from eight under par upwards is probably still in the hunt, and on a packed board, two names stand out as the best value. Si Woo Kim at 9-2 and Kevin Kisner at 12-1.

It is difficult to think of a reason why Kim should be the same price as Luke List. Kim is a world-class 22-year-old who already has two US Tour titles in his locker, including one of the most prestigious of all.

And his victories have come in emphatic fashion. Kim won the 2016 Wyndham Championship by five shots, then the Players Championship by three. He has shown he can get the job done in a tight finish too – winning a playoff for the 2015 Stonebrae Classic on the Web.com Tour.

List is a US Tour maiden, 11 years older than Kim, so the prices do not make sense. Kim has the perfect game for the Harbour Town Links and proven bottle, so it would be much more surprising to see the Korean drop out of contention than List.

Kisner has improved his golf and his score each day and is lurking dangerously just three shots off the pace. Harbour Town is an ideal set-up for his talents and he lost a playoff for the 2015 Heritage.

Kisner rediscovered his A-game at the WGC-Dell Technologies Match Play, finishing runner-up to Bubba Watson, and a strong final round can be anticipated from the local man. He was born in South Carolina and still lives there.

Racing Post Sport followers are on Kim ante-post at 100-1, so have some decisions to make. The current price of 9-2 is too big, so pressing up is a more attractive option than laying off. That said, it would be foolish to ignore the threat posed by Kisner, and 12-1 is a generous about the Carolinian.

An outright cover-shot on Kisner is advised. Final-round threeball punters are pointed towards Kisner, who can see off Billy Horschel and C.T. Pan in the 1.50pm match, while Matt Kuchar should prove too steady for Byeong-Hun An and Danny Lee (1.30pm).