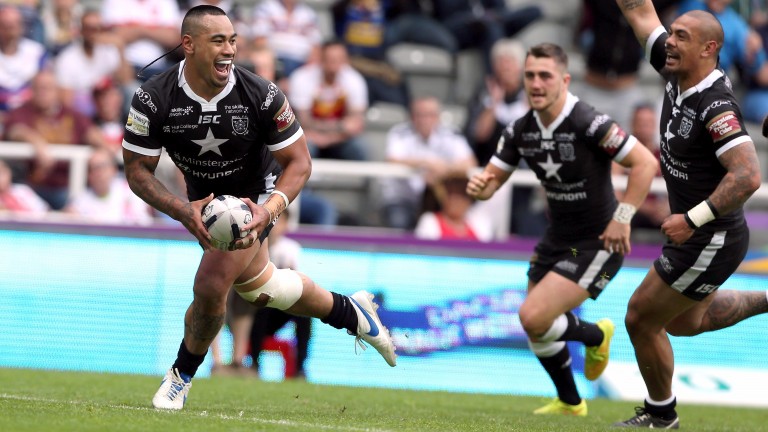 A fortnight ago, Hull held off a Wigan fightback to lift the Ladbrokes Challenge Cup at Wembley and a repeat performance will virtually secure a spot in the Betfred Super League playoffs for the Black & Whites.

Two weeks ago, the Warriors were fractional favourites but the roles are reversed with Hull having home advantage.

Lee Radford's side can be backed at 10-11 to repeat June's home win over Wigan while Shaun Wane's visitors are available at 5-4.

In a congested race for semi-final spots, this is a crucial contest. A Hull victory would put them four points clear of their opponents with just two rounds of the Super 8s remaining while a Wigan win would take them above the Airlie Birds on points difference.

Hull, who have lost their last two league games, have captain Gareth Ellis and winger Steve Michaels suspended. Carlos Tuimavave is out with an ankle problem and Fetuli Talanoa is doubtful with an elbow injury.

Wigan have no such problems and recall fit-again Tom Davies and Joel Tomkins to their squad.

All things considered, the match odds look about right but there are still a couple of decent bets to be had.

The best of those looks to be backing the scoring to be opened with a penalty. Hull are 12-1 to do so and Wigan 14-1.

Those are huge prices considering that in a match of this importance both teams will be keen to snap up any chance to post an early two-pointer given the opportunity.

And the 5-4 about Mahe Fonua touching down also appeals. The Tongan international notched twice and had a third effort disallowed against Wigan in the cup final.

He didn't play in the previous home game against the Warriors but Steve Michaels who filled in for Fonua on the right wing bagged a brace.

Away from the TV cameras the top two clash at The Jungle where Castleford host Leeds.

The Tigers have already beaten the Rhinos three times this season and are 2-5 to make it four and go a dozen points clear at the Super League summit.

Cas hammered Leeds 66-10 at home in March, winning by 11 points at the Magic Weekend in May and at Headingley the following month so an eight-point handicap looks within the compass of the league leaders.

Leeds will be without the suspended Rob Burrow while Tigers coach Daryl Powell is able to freshen up his squad by recalling Grant Millington and Mike McMeeken.