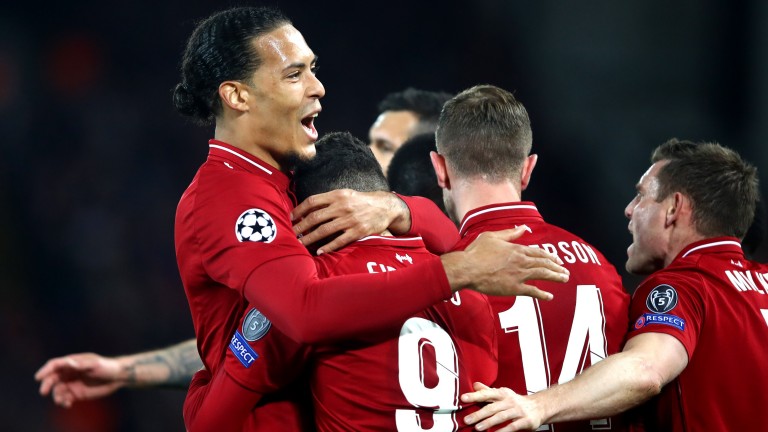 Liverpool are Premier League champions in all but name. Whether they will get that name, on the pitch or in a video conference, I cannot say. But I do have some thoughts about how well they have played. Here they are.

Liverpool have scored 76 per cent of the goals in their games. There is a relationship between goals scored and conceded and points gained, as you would expect.

In one match the relationship is precise. How many goals a team score and concede determines whether they win, draw or lose, and how many points they get – three for a win, one for a draw, none for a loss.

Over two or more games the relationship is not precise. A team might play two games, score once and concede once. They could win 1-0 and lose 0-1, gaining three points. Or they could draw 1-1 and 0-0, gaining two points. Such teams will average between two and three points. We can talk now only about an average within a range of possibilities.

There is a simple formula that will tell you the average number of points gained for any number of goals scored and conceded over any number or games. Or it will for all the examples you are likely to encounter in practice.

This is Jurgen Klopp’s fifth season as Liverpool manager. In each of the other seasons the number of points Liverpool gained was within a few either side of the average for teams with similar numbers of goals for and against. This season Liverpool have gained a lot more points. Why?

It must be because they have tended to score when it mattered and concede when it did not matter. This could be the sign of a good team. Or it could be the sign of a lucky team. Klopp has said that this season Liverpool have played exceptionally well but also at times enjoyed good fortune. “In life and in football,” he said, “without luck you don’t have a chance.”

It is possible that Liverpool deserved 76 per cent of the goals in their games and were lucky to get as many as 82 points. But that is not the only possibility. Another is that they deserved 82 points and were unlucky not to score more goals or concede fewer. Probably the best explanation would fit somewhere in between.

When there is a discrepancy between goals scored and conceded and points gained, what happens next? Usually in the next games they converge. Past scores tend to be better than past results as an indicator of what will happen in future games, but only slightly. By results I mean wins, draws and losses; by scores I mean 2-1, 1-1, 1-2 and so on. You will not be far off if you assume that a team will perform in future at a level about halfway between the levels suggested by past scores and past results.

Analysis of a data set can reveal only what is in the data set. And no data set will contain everything you might want to discover. Not results, not goals, not expected goals, not shots, not possession. We should try to find whatever bit of the truth there might be in each one and then put the bits together.

The alternative has a name. It is Atenism.

I came across the word in Ishmael Reed’s novel Mumbo Jumbo. He used it to describe a belief that there is one way of looking at things that is right and all other ways are wrong. It is similar to the single story that novelist Chimamanda Adichie warned against. “The single story creates stereotypes,” she said. “And the problem with stereotypes is not that they are untrue, but that they are incomplete.”

Aten was an Egyptian sun god. It was one of many sun gods, and the sun gods were one of many types of gods. Until the reign of Pharaoh Amenhotep IV. He was the husband of Nefertiti and father of Tutankhamun. He decreed that Aten was the only god that should be worshipped. Amenhotep IV changed his name to Akhenaten, which means spirit of Aten. And he forbade worship of any other gods. Atenism in Egypt died with Akhenaten, more than 3,000 years ago.

Mumbo Jumbo is a detective story. It is also about the jazz age. It is about race relations in the United States. It is a history of the world that includes black African and Caribbean civilisations. It is many things.

Author Ishmael Reed used Atenist as an insult for anybody who closed their eyes to other ways of looking at things. Atenists make bad decisions. They see only a small part of a big picture. Atenists would either underestimate or overestimate Liverpool.