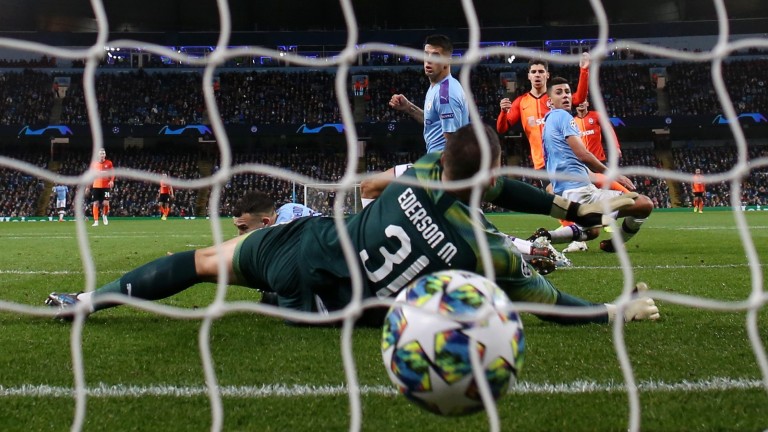 Walter Winterbottom, the first England manager, said the difference between football and other games is that in football it is harder to score. Vive la difference, he added.

The Champions League knockout phase starts on Tuesday. In the group phase over the last three seasons – 2017-18 to 2019-20 – one goal was scored for every 124 instances of possession, according to stats I collected from the Uefa website.

Earthquakes cannot be predicted precisely. Seismologists can say that in Las Vegas a shock of magnitude 6.75 or greater will occur once in 1,200 years. But they cannot say in which year.

We can say a football team have scored once every 124 instances of possession, but we cannot say if they will score with the next one, or with any in this match.

How many will they get in a match? One hundred and ninety-two, on average, according to Uefa.

I suspect Uefa count as separate instances of possession some things that I count as different phases of the same possession.

For example, a team take a short goal kick then play the ball out from the back until an opponent knocks a pass into touch. The ball is thrown to a player who dribbles until he is fouled. From the free kick a goal is scored. You could call this three possessions. I call it one possession in three phases. At no point between the keeper’s kick and the goal did the opposition have possession. One opponent touched the ball but they did not gain possession of it.

It is one of the reasons why the best team win less often in football than in other games – though they still win more often than they lose. And over a rising number of matches a good team will become ever more likely, without ever being certain, to accumulate better results than a bad team.

For all practical purposes we can say that both teams in a match have the same number of possessions. Uefa imply averages of 192 for each team, 384 for a match. One team have the ball, then the other, and so on throughout the match. Both teams get effectively the same number of opportunities to score.

The answers can overlap. Where you lose the ball in your move affects the chance of conceding in your opponents’ move. The closer the ball starts to your goal the more likely it is to end in your goal.

Which is why coaches as diverse in other respects as Pep Guardiola and Graham Taylor have asked players to win the ball high on the pitch.

Guardiola also does the opposite. He risks his team losing the ball near their own goal by asking them to pass it out from the back. He knows how dangerous failure will be. He does it because rightly or wrongly he thinks that for his team costly failures will be rare enough not to wipe out all the benefits that accrue from successes.

You get what you can pay for most of the time

A club want to get better results in the Champions League – how can they do it? Be richer. I appreciate this is easier said than done.

There is, though, a clear relationship between pay and performance in Uefa competitions. As the graph shows. There is in other competitions too.

The richest clubs pay the highest wages and attract the most sought-after players. These usually turn out to be the best players, but not always. Which is why the relationship between pay and performance is strong but not perfect.

The annual Uefa Club Licensing Benchmark Report gives the average wage bill for top division clubs in each of Uefa’s 55 member countries. I took figures from the last five reports, which cover seasons 2013-14 to 2017-18. I also took the Uefa country coefficients for those seasons from the Uefa website. The country coefficients are based on the results of clubs in the Champions League and Europa League.

So low numbers equated to high wages or high performance, and the other way round. And the relationship between those things was unmistakable. In statistical language, differences in pay explained about 90 per cent of differences in performance.