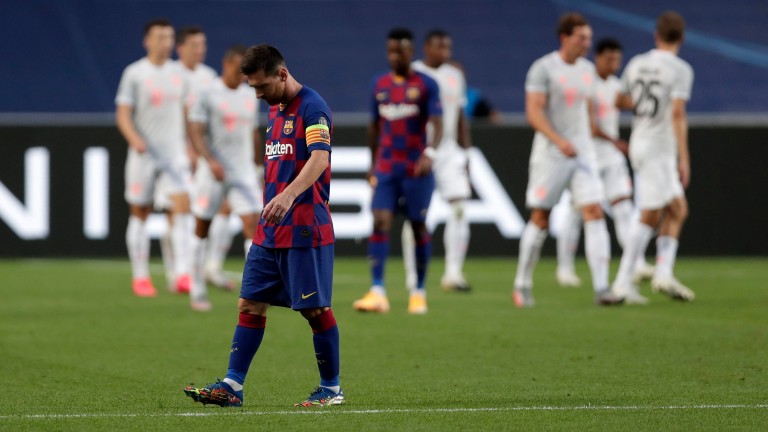 Gary Cotterill was a Sky Sports News reporter in Barcelona covering Lionel Messi’s transfer request. Last Sunday he wrote about it on the Sky Sports website.

“If you looked through any online article or listened back to any TV report or radio report from earlier this week,” Cotterill said, “you wouldn’t have found anyone telling you Lionel Messi was going to stay at Barcelona.” Then Messi told us he would.

You will hear and read a lot of analysis of transfers that have taken place. I suggest you consume it all with a pinch of salt. There is a law of transfer interpretation. It is more likely to go too far than not far enough. Much more likely.

Even Messi might not have given a seismic boost to Manchester City, if he had left Barcelona and joined them. And not only because he would not have helped with their biggest problem, which is the same as Barca’s. Good teams have scored against them too easily.

The reality is that nobody knows for sure which transfers will be hits and which will be misses.

Four years ago the football data company Prozone published a report on a decade of Premier League transfers. Only a third of signings had played more than half of the minutes they could have played.

The cost of the signings who had played for less than half of the time, in transfer fees alone, was £900 million.

One reason transfers can go wrong is that clubs like to buy players who have been doing well recently. They might not carry on doing so well.

Let me give you an example of what I mean.

I studied lists of goalscorers for the first 27 Premier League seasons – 1992-93 to 2018-19. For each season I made a note of every player who scored 15 goals or more – the sort of players in which other clubs potentially would be most interested. Then I looked at how many goals those players scored in the next season.

But something else leapt out at me. Not only did most players score fewer goals – they also featured in fewer games. So I realised that a fairer comparison would be goals per appearance.

The average goals per appearance in the first season was 0.57. In the second season it was 0.43 – 25 per cent lower. If you buy a hot player you will probably get your fingers burned. In all likelihood you will pay more than you wanted to and get less than you hoped for.

There is another reason transfers can go wrong. In football individuals perform within a group.The group can assist the performance of an individual in ways that do not become apparent until the individual is put into a different group.

Boris Groysberg, a professor of organizational behaviour at Harvard Business School, researched analysts at Wall Street stockbrokers. Analysts predict whether a stock will rise or fall.

He concluded that the star analysts had benefited from original employers who brought out the best in them.

Every position in a soccer team involves regular interaction with teammates. Goalkeeper is perhaps the most isolated. Even a goalkeeper’s performance, though, can be influenced by its context. A keeper could look better with a bad team, for whom he is making saves throughout a game, than he would with a good team, by whom he might be called upon only once.

William Goldman was a screenwriter who won Oscars for the scripts of Butch Cassidy and the Sundance Kid and All the President’s Men. He said nobody in Hollywood knows whether a film will succeed or flop. They might think they know but they do not. As Goldman put it in a book called Adventures in the Screen Trade: “Nobody knows anything.”