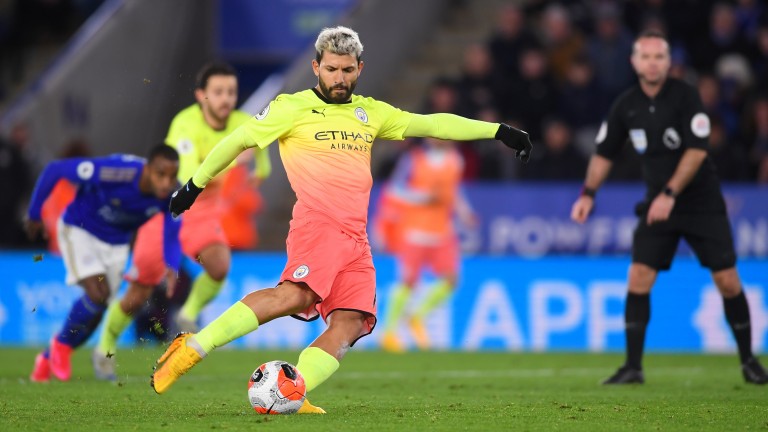 Manchester City scored a penalty on Wednesday in their Champions League round-of-16 first-leg win at Real Madrid. They missed their last four Premier League spot-kicks. What was the chance of missing so many? Let’s see if we can work it out, and then some other things too.

When I say a penalty was missed I mean it was not scored, so I count shots that were saved as well as shots that did not hit the target. City’s last four Premier League penalties were saved.

City might average seven Premier League penalties a season, so a team like them should miss four in a row approximately once every 100 seasons. It ought to be a once a century event.

You can bet on all sorts of things related to penalties. Will there be any in a match, will one be scored, will one be missed? Will this team get any penalties, will they score, will they miss?

The figures that follow also come from the last 16 Premier League seasons.

What might surprise you is that the chance of a penalty being taken, scored or missed did not vary much with the type of match.

I divided games into groups according to the difference in final league positions between the teams. In that way I was able to get an impression of how things changed with the character of a fixture.

What was clear was that no matter how great the difference in ability between two teams the chance of a penalty being taken was never far from 21 per cent. In some sorts of matches it was higher and in others lower, but there was no rhyme or reason to these variations, which were mostly small anyway.

Perhaps this should not be surprising. The chance of a penalty being taken must depend heavily on how long attackers spend with the ball in the opposition penalty area. In some matches one team will spend more time than the other. In certain matches one team will spend a lot more time than the other. But a rise for one might be more or less offset by a fall for the other. Added together, the total time attackers spend with the ball in their opposition’s box might be about the same.

You will notice two things. First, those percentages for a team are slightly more than half the percentages I gave earlier for a match. This is because in some matches both teams took a penalty, scored a penalty or missed a penalty. The second thing you will notice is that nine plus three adds up to 12, not 11. A similar explanation: in some matches a team took more than one penalty, scoring at least once and missing at least once.

Fair odds for a blindly chosen team would have been about 8-1 to take a penalty, about 9-1 to score a penalty and about 33-1 to miss a penalty.