Cards bet for the Bundesliga clash between Werder Bremen and Mainz 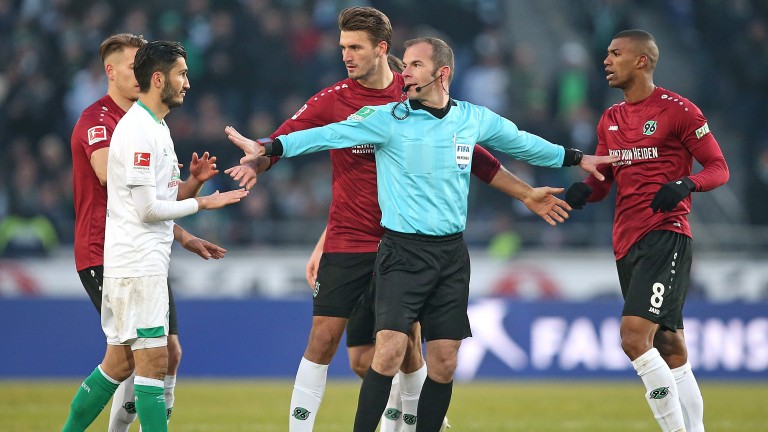 Referee Marco Fritz has shown 45 yellows and three reds in 11 Bundesliga games this season. Using bet365’s scoring system in which each yellow counts as one and each red as two he has averaged 4.6 cards per game.

So on first impression there does not appear to be any value in backing under 4.5 Asian total cards at decimal odds of 1.825 – fractional odds of 33-40 – when Fritz referees Werder Bremen v Mainz on Saturday.

But a first impression can be misleading. And this one just might be.

Fritz this season has flashed cards at a faster rate than in any previous season, which could be a clue. In his previous nine seasons in the Bundesliga he produced cards at about the same rate as a typical colleague – actually it was a little bit more slowly but for all practical purposes we should say it was the same.

We do not know which explanation is right, but the second could be – and if it is under 4.5 Asian total cards at decimal odds of 1.825 would represent value for money.

Odds of 1.825 imply a 55 per cent chance of a bet being successful. In the Bundesliga during the last ten seasons 63 per cent of games have finished with fewer than 4.5 Asian total cards.

This season neither Bremen nor Mainz have received more cards than we should have anticipated from them. Nor does there appear to be anything at stake that would make a low card count less likely than it otherwise would have been.

Before this round of fixtures Bremen were eighth in the table, five places and nine points above Mainz. Bremen could qualify for the Europa League if they rose to sixth, but they probably will not finish that high. Mainz are ten points above the relegation playoff place, 16 points about the automatic relegation places.

Even allowing for the uncertainty concerning Fritz, there do seem to be grounds for thinking that the chance of under 4.5 Asian total cards in the Weserstadion could be greater than bet365 estimate.

In my non-tipping articles I stress how one of the ways in which people can get the wrong impression of what happened before is that they interpret the score rather than the play – what a team got rather than what they deserved, which is a better (though still far from flawless) indicator of what they might get next.

So I was delighted to hear a recently retired coach I have admired for 25 years say the same things. Louis van Gaal gave an interview last week to Simon Stone of the BBC. Van Gaal won trophies with Ajax and AZ Alkmaar in the Netherlands, Barcelona in Spain, Bayern Munich in Germany and Manchester United in England.

He said that this season in the Champions League round of 16 Ajax played better against Real Madrid in the first leg, which they lost 2-1, than in the second leg, which they won 4-1. Of course pundits praised Ajax after the second leg but not after the first leg. “The media do not analyse the game,” Van Gaal said. “They analyse the result.” I could not have put it better myself.