Kevin Pullein: One market in which Osasuna may hold their own against Barcelona 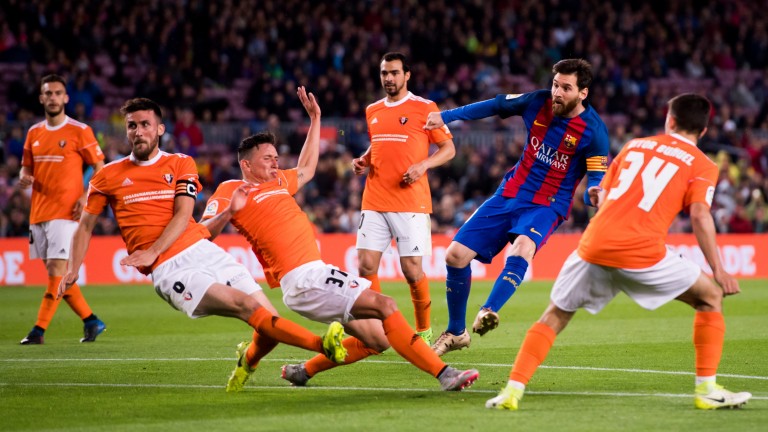 Barcelona at Osasuna in La Liga is likely to be mostly one-way action even if Lionel Messi does not make his first appearance of the season, which he might not.

Barca will probably have about two-thirds of the possession. But they might not force quite as many corners as bet365 have budgeted for.

Back Osasuna +2.5 Asian handicap corners at decimal odds of 2.0, equivalent to the fractional price of evens. If Barcelona win the corners count by three or more the bet will fail, but otherwise it will succeed.

Without Messi in their first two games, Barcelona had 72 per cent possession in a 1-0 defeat at Athletic Bilbao then 70 per cent possession in a 5-2 come-from-behind win at home to Betis. They won the corners count by five in the first game and by 11 in the second. Anything like that and the bet goes down. But there is a chance things will be different.

Over two full seasons with Ernesto Valverde as coach Barcelona have controlled slightly less possession and taken a slightly smaller share of the corners than at any time since Pep Guardiola became coach and started a new era of domination in Spain.

This season possession and corners could rise again, so let us consider every season since Guardiola became coach, all those from 2008-09 to 2018-19. And let us look at what happened in Barca’s games away to teams such as Osasuna.

Osasuna have returned to La Liga after two seasons in the Segunda Division. They won 1-0 at Leganes then drew 0-0 home to Eibar – their games were low-scoring in the Segunda Division too. They may stay up. But let us examine the worst-case scenario and imagine Osasuna are actually a team bad enough to be relegated again.

What happened over the last 11 seasons in Barcelona’s La Liga games away to teams who were relegated? Anyone who had backed their opponents +2.5 Asian handicap corners would have won 18 times out of 33 – a strike-rate of nearly 55 per cent. Decimal odds of 2.0 imply a 50 per cent chance of a bet being successful.

The number of corners Osasuna won and lost in their two seasons in the Segunda Division were typical for the number of goals they scored and conceded. Usually a team’s goal stats and corner stats are related.

Without Messi, Barca’s attacking play is less penetrative, so perhaps they will not only gain a smaller share of all goals but also a larger share of corners. At the odds, though, it is worth being with Osasuna +2.5 Asian handicap corners.

Early-season form can be misleading. Don’t take my word for it. Look at what has happened in the first month of the Football League.

Swindon won their first two games in League Two. They have not won since, drawing twice and losing once.

Admittedly I chose those examples because they are the most striking. So consider what has happened overall to teams who won or lost their first two games.

Eight teams won their first two games. They have since played a total of 24 times – winning seven, drawing ten and losing seven to average 1.3 points per game.

Nine teams lost their first two games. They have since played a total of 26 times – winning eight, drawing eight and losing ten to average 1.2 points per game.