Kevin Pullein: Beware of reading too much into a short sequence of form

Plus, Kevin Pullein's best bet of the day 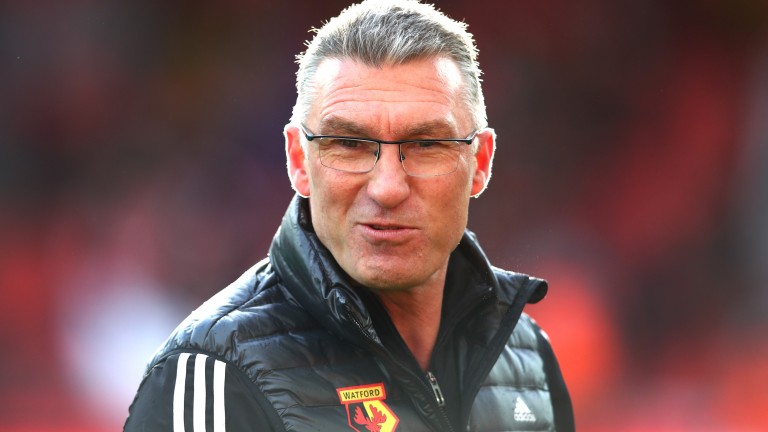 Watford lost that first game against Liverpool. Nothing unusual there. Only once in the Premier League this season have a team not lost to Liverpool.

Then Watford won four games out of five, drawing the other. After Watford had beaten Bournemouth 3-0 in the last of those games they moved out of the relegation zone. Everyone I heard talking about them said they were on the up and their future looked bright.

Since then Watford have not won in five games. They drew twice and lost three times. They have dropped back into the relegation zone. Anyone I hear talking about Watford now says their future looks grim.

This is so typical of football – the ups and downs and the reactions to them.

Watford played well during their unbeaten run, but not so well as to deserve 13 points from a possible 15. That was an almost Liverpool-like return. They played less well during their winless run, but not so poorly as to deserve only two points from a possible 15. There were times when they deserved more than they got. Twice they were beaten in the last minute.

One of the best lessons you can learn about football is that what happens in one short sequence of games might tell you nothing about what will happen in the next short sequence of games. And not only because in either or both there can be a difference between what a team put into their performances and what they got out of them.

The second group of games, in turn, may tell you nothing about what will happen afterwards in a third group of games. Which is what should give Watford hope, whatever happens in the return match with Liverpool.

Best bet of the day

Back Mansfield to take most corners in their League Two game at home to Swindon. Sky Bet offer 7-4. Mansfield probably are less likely than Swindon to flight the most flag-kicks, but perhaps not as unlikely as those odds suggest.

Richie Wellens’ Swindon are top of the table with 66 points from 34 games. Mansfield are 21st with 35 points from 35 games. Graham Coughlan became manager in December, recruited after a successful year at Bristol Rovers, but he has not had time yet to get results moving in the direction he would like.

Over the past two decades in EFL games with similar result expectations the chance of the home team taking most corners was typically about 45 per cent. In other words, fair odds would normally have been in the region of 5-4.

They should probably be longer for this game at Field Mill, but perhaps not as long as 7-4.

Mansfield have taken an unusually small share of the corners in their games this season. The ratio has improved since Coughlan became manager, but only away from home. At home it has gone down even further.

This is strange, but strange things happen in football. They do not stay strange forever. The all-important questions are when they will start to return to normal, and how quickly the process will take place.

And doing that arguably raises the possibility that the odds against Mansfield taking most corners against Swindon should not be as high as 7-4.