Rumour Mill: Vigorous Vida could bolster Toffees at the back 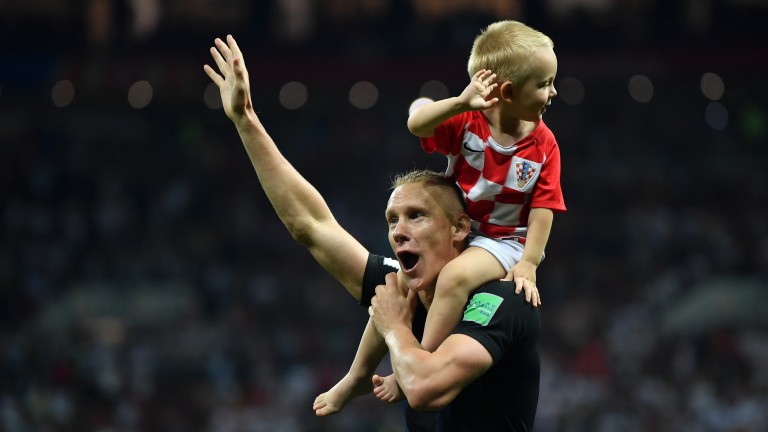 Players performing at the World Cup will be linked with big-money moves and we will keep you updated throughout the tournament with scouting reports on the supposed transfer targets.

Liam Flin says: England missed opportunities to kill off their tie with Croatia on Wednesday and, while wastefulness in the final third played its part, Domagoj Vida was crucial in nullifying their attacking threat.

He was the best defender in multiple departments, leading the Croatian team in clearances made (eight) and number of interceptions (three).

The centre-back was strong to deny England from set-pieces, where they have proven to be dangerous, and his experience of having previously played full-back makes him a versatile asset.

Liam Flin says: Pavard came under fire for some of his performances in the group stage of this World Cup but has since responded with a handful of fine performances.

His biggest challenge against Belgium was taming the dynamic Eden Hazard and he succeeded. The Chelsea forward likes to cut inside so it was important Pavard remained on his feet and he frequently diverted Hazard away from danger areas.

Only N'Golo Kante made more passes than Pavard's 43 in the game for France and the full-back continues to refine his offensive game since switching to the right from a more central role.

Liam Flin says: Mandzukic is well-recognised as Croatia's focal attacking threat but his performance against Russia was somewhat subdued.

The Juventus forward demonstrated great movement to find space on the right and deliver a cross of pin-point accuracy for the opening goal but that was the limit of his contribution.

He struggled to frequently test Akinfeev and lacked the pace and energy to penetrate Russia's defence. He could be a risky option for United.

Liam Flin says: Arsenal's pursuit of Lucas Torreira has been one of the ongoing stories of the summer and the Gunners should be encouraged by what they saw from their potential new signing against France.

The goals came from an avoidable header and a goalkeeping blunder and Torreira played his part in limiting French opportunities in the final third.

His awareness was great all through the game, as he nullified threats the moment they surfaced, and he was composed in possession and strong in the air.

Liam Flin says: Fulham target Augustinsson played his part in a solid win for Sweden against Switzerland, contributing to attacking opportunities down the flank but not neglecting his defensive duties in the process.

The full-back made more crosses than any other Swedish player (seven) and had the third-highest number of touches on his team.

Much of Sweden's attacking game revolves around good delivery and aerial threat and Augustinsson has proved to be a danger on the left.

Liam Flin says: Hailed as a particular strength of Brazil's heading into this World Cup was their depth in the goalkeeping department, with shot-stopper Alisson keeping Manchester City's Ederson out of the first-team frame.

A third consecutive clean sheet in the tournament suggests the Roma goalkeeper will keep the number-one spot. Mexico had just the one shot on target but Alisson was equal to it and he was constantly alert to any aerial danger that came his way.

Mark Langdon says: There has been hype surrounding Golovin for a while but he has taken several steps forward at this World Cup, proving himself in high-class company.

Against Spain Russia had to do a lot of defending and Golovin showed enormous energy levels but there were also occasions when he produced nice moments. He would also do better in a stronger side so Chelsea could do a lot worse.

Mark Langdon says: It is always difficult for individuals to shine when the team performance is going badly so maybe it would be wrong to go in as hard as a Javier Mascherano tackle, but Ever Banega failed in his role as Argentina's playmaker against France.

Banega got on the ball enough with 62 passes but there was little in the way of impact as he failed to connect with Lionel Messi as he had against Nigeria, and the Sevilla man was also guilty of being robbed in possession at critical times.

At 30 there is unlikely to be any kind of improvement left in him and Arsenal may find better options when looking for a long-term replacement for Jack Wilshere.

Early on he looked threatening but he appeared to fade in the later stages of the match. Quintero was the only Colombia player to make any key passes in the game and he forced an effort on target. He will need to show more in the next phase of the competition to warrant a move to a club such as Real Madrid.

Liam Flin says: He was not called into action as much as expected but Robin Olsen recorded a second clean sheet of the tournament against Mexico.

Olsen had just the one save to make in the first period and the Mexicans mustered only three shots on target in total. He was a commanding figure behind their defence however and his communication no doubt played a part in Sweden's solid shape at the back.

Liam Flin says: Centre-back Trent Sainsbury has been a crucial component of Australia's defence at this World Cup and he was among their best performers against Peru.

Sainsbury showed composure in possession, with defensive partner Mark Milligan the only Australian to make more passes in the game, and he made the most interceptions (three) and clearances (three) in the team. Both goals in the game were more down to Peruvian quality as opposed to defensive errors and Sainsbury looks as if he could be a good option for Villa.

Liam Flin says: Spain could not keep tabs on an energetic Morocco side in their final group match and left-back Jordi Alba struggled at times with the pace and width of the Atlas Lions.

Alba made just the solitary tackle all game and was caught out high-up the pitch in the opening goal. His delivery was for the most part good but he neglected his defensive duties far too often, which showed glimpses of naivety.

Mark Langdon says: Lozano was unable to add to his goal against Germany but that was the only thing missing from yet another excellent performance from the Mexico flyer.

The PSV star is full of pace, works tremendously hard to win back possession and was calm enough in possession to assist Javier Hernandez's counter-attack goal.

Lozano would be a sensational signing for Everton but they may find a bigger club beats them to his signature.

Liam Flin says: Simple but effective best summarises Etebo's performance for Nigeria against Iceland. The youngster was a key component in an industrious midfield that dominated possession.

Etebo made two key passes in the match and no Nigerian won more tackles than his four. He sat back in a bank of five midfielders and broke down Icelandic possession to give pacey forwards Ahmed Musa and Kelechi Iheanacho licence to roam.

Liam Flin says: Nicolai Jorgensen netted ten league goals for club Feyenoord last season but his finishing has been seriously under-par at the World Cup for Denmark. He set up Christian Eriksen for the opening goal against Australia but that was the highlight of his performance.

The Dane regularly ran at the Socceroos defence without purpose and his failure to head home a pin-point cross from Stryger Larsen in the first half summed up a dismal performance.

Liam Flin says: There were few Portuguese players who impressed in their game with Morocco and Rui Patricio was arguably their star performer.

Morocco had four shots on target but the Wolves signing was equal to everything the Atlas Lions threw at him.

He had safe hands when called upon, was commanding in the box at set-pieces and capped off his performance with a stunning save to keep out a Younes Belhanda header just before the hour mark.

Liam Flin says: Poland failed to register a shot on target in the entire first half and it was a large part down to the telepathic understanding of Kalidou Koulibaly and Salif Sane at the heart of Senegal’s defence.

Koulibaly was strong from set-pieces, nullifying the threat of a physically imposing attacking duo of Robert Lewandowski and Arkaudisz Milik, and helped guide his side to a surprise victory.

He did demonstrate vulnerability on the ball at times but as far as his defensive duties were concerned, he looked the part and would be a good addition to any side this summer.

Liam Flin says: Sweden were the better side against South Korea but indecisive Emil Forsberg was central to their struggle to convert superior possession into genuine chances.

Deployed on the right flank of a 4-4-2 system, the Arsenal target demonstrated a reluctance to run with the ball, often choosing to play a sideways pass rather than go at the full-backs. He was comfortably dispossessed frequently and needs to show more if he is to earn a summer switch.

Mark Langdon says: He won't be cheap but Milinkovic-Savic looks like one of the best players on the market this summer and would be a welcome addition to any club in world football.

Milinkovic-Savic completed four of his five dribbles for Serbia against Costa Rica and made three key passes in a dominant display. The 23-year-old has the potential to get even better and this is the perfect time for him to make the next step from Lazio.

Mark Langdon says: Centre-back Balogun had a decent season with Mainz in the Bundesliga and had been in good form for Nigeria in World Cup qualifying but Brighton fans are unlikely to have been overly excited by his display against Croatia.

Liam Flin says: A peripheral figure for much of the first half, Hakim Ziyech failed to justify the hype surrounding his potential signature against Iran.

Morocco's greatest shortcoming was their final ball and Ziyech was central to it. The winger drifted in several crosses from the left touchline but they were often executed without conviction.

The Ajax man rifled a volley at goal from outside the box in the 80th minute, which was a surprise given his usual wayward shooting, but he failed to impose himself on a match where his side needed him to impress.

Smolov played his part in Russia's second goal, rolling the ball out to Denis Cheryshev, but it was a poor pass and the 28-year-old struggled to make an impact on the game beyond the assist.

Artem Dzyuba netted within moments of replacing Smolov, which highlighted he was better suited to a side looking to whip balls into the box than the supposed West Ham target. The Hammers may be best off avoiding Smolov this summer.