United shackles to stay on 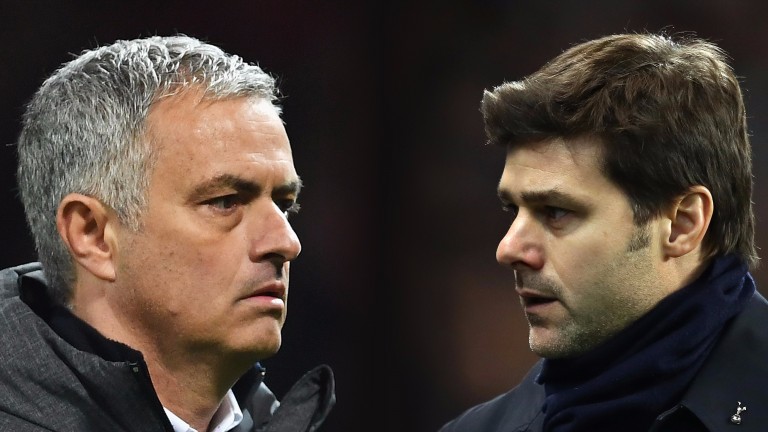 Mauricio Pochettino was boiling with rage after Pep Guardiola suggested his Tottenham outfit were a one-man side and now Spurs must prove they are much more than just the Harry Kane team at Manchester United.

The betting has shifted towards United since news broke of Kane's Old Trafford absence. Jose Mourinho's men have been cut from 13-10 to 6-5 for a crunch Premier League clash which sees the teams who are joint-second in the table facing off for the right to be called Manchester City's most realistic title challengers.

However, the potential for a tight game, possibly with United and Spurs cutting each other's throat in the race in their bid to hunt down City remains a fair possibility and a low-scoring outcome is likely.

The chance is there for United to take maximum points as they look to bounce back from their shock league defeat at Huddersfield, although Mourinho usually finds it difficult to remove the shackles.

An enterprising start to the season suggested a new approach until the 0-0 draw at Liverpool was followed by an equally turgid 1-0 Champions League triumph against Benfica and they deservedly lost at Huddersfield last week.

There is a spark missing in midfield with Paul Pogba sidelined and in big matches Mourinho tends to revert to what he knows best.

Since arriving in Manchester, United have played 12 fixtures against their fellow big-six rivals and nine of those featured under 2.5 goals, with the Red Devils scoring only seven times.

So Romelu Lukaku may not see many teammates up close and he will be in for a battle alongside crack centre-backs Jan Vertonghen, Toby Alderweireld and Davinson Sanchez.

Spurs showed in their 1-1 Champions League draw at Real Madrid that they are capable of dropping deep into a back five at times, while Pochettino is also likely to select two holding midfielders rather than the attacking line-up used in last week's 4-1 win over Liverpool.

Kane scored twice in that victory to take his Premier League tally to eight for the season as he chases a third straight Golden Boot.

Pochettino has a variety of options when looking for Kane's replacement with the hold-up skills of Fernando Llorente or the counter-attacking speed of Heung Min-Son, but it's still a seismic blow to be going into such an important game minus their talisman.

Tottenham won six and drew three of the nine top-flight games Kane failed to start last season, but those draws at Bournemouth and West Brom proved costly in their pursuit of champions Chelsea.

Only two goals were scored in Tottenham's three Champions League games without Kane last season and this is a game of similar magnitude.

Tottenham
Harry Kane has joined Victor Wanyama and Erik Lamela on the sidelines.

Key stat
Manchester United have won 20 and drawn three of their last 25 home league games against Spurs at Old Trafford.