Judd Trump and Ding Junhui set to produce the goods

Outsiders Walden and McGill will do well to upset the odds 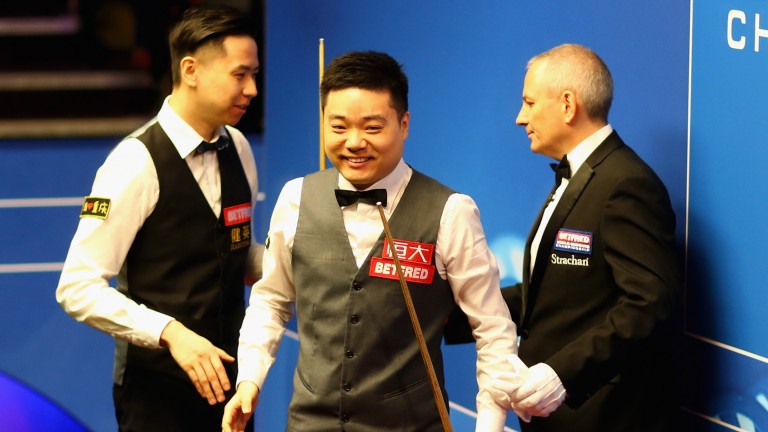 Ding Junhui is picture of happiness at the Crucible this year
Naomi Baker
1 of 1
By Adrian Humphries 8:00PM, APR 28 2018

Day nine
BBC and Eurosport, from 10am Sunday

Walden v Trump 10am
Judd Trump got out of jail in his Betfred World Championship curtain-raiser against Chris Wakelin, but while landing a maiden world title is unlikely to prove an easy task for the Bristolian his early scare could help him relieve tension.

Ricky Walden, whom Trump meets next, is playing pretty well. The 2013 semi-finalist has been under­rated for the title – he has been matched at 1,000 on Betfair's exchange – but the fact he has struggled with back pain is unlikely to help his cause.

Trump leads their series 11-6, although 13 of their 17 encounters have been in the low-key Championship League. Trump has won three of their four clashes that have not been over the best of five frames and he triumphed 10-4 in their most important clash in the 2016 China Open final.

Trump should secure a quarter-final berth before Walden wins 11 frames.

Ding Junhui v McGill 10am
If Anthony McGill plays like he did in his opener against Ryan Day, then this could be a cakewalk for Ding Junhui.

It's not that Ding may be at his brilliant best but more that McGill, who, like the Chinese number one has claims to being a future world champion, seems to be lacking direction and belief on the baize.

The Scot's 50-ups in his 10-8 win over Day made up at a paltry 51 and that figure will surely need to improve to have Ding searching for the worry beads.

Of course, McGill is talented enough to step things up and he deserves credit for being patient and reeling in the emotional Day.

But Ding is unlikely to struggle to cross the winning line the way Day did and so if McGill is going to be competitive in this last-16 outing, he needs to do it for himself.

He has an opportunity to do that, but all things considered McGill is unlikely to make sufficient strides to rumble Ding so it's probably wiser to find a way to support the third seed.

The World Open champion is 7-10 to successfully concede his opponent a start of 2.5 frames and that could be worth taking.