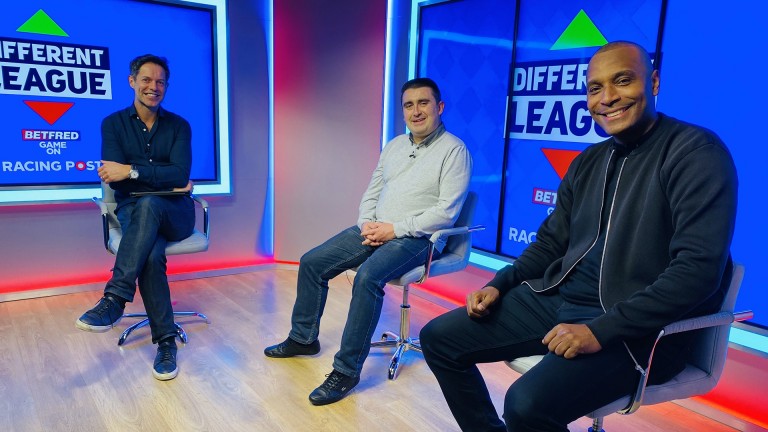 Clinton Morrison believes bookmakers have got their Premier League title betting the wrong way around and is backing Liverpool to prove they should be favourites when they meet Manchester City at the Etihad on Sunday.

Speaking to presenter Scott Minto on the Racing Post's Different League YouTube show in association with Betfred, former Ireland international Morrison was confident the champions will retain the title.

Believing the 5-0 thrashing of Atalanta was the perfect fillip before the trip to Manchester, Morrison reckoned "Liverpool are title favourites" despite bookmakers rating them as 2-1 shots behind 11-8 City.

"I expected Atalanta to give them more of a game" said ex-Palace hitman Morrison. "I was really impressed with Liverpool.

"Diogo Jota scored his hat-trick and was outstanding through the middle and the pace of him, Sadio Mane and Mohamed Salah caused Atalanta all sorts of problems.

"The young young boy Rhys Williams played ever so well and full credit to them. Now I think they can go to City and get the win."

Jurgen Klopp has a decision to make in terms of who he selects for the final attacking position alongside Mane and Salah and Morrison believes Brazilian Roberto Firmino will get the nod over hat-trick hero Jota.

"There will be times when all four can play together but it's not in this game and Klopp knows how reliable Firmino has been for him. Firmino is so clever, he can drop into spaces and if it doesn't work out then you can always get Jota on early."

As a regular goalscorer for Palace, Birmingham and Coventry among others, Morrison admits he could understand if Jota would be annoyed should he not make the starting 11 against City.

"It's a difficult decision for Klopp but I would be absolutely fuming if I was dropped after scoring a hat-trick, although ultimately I would understand and I know I'd be knocking on the door of getting a starting spot which is what the manager will want.

"Jota is in form and a lot of people will say just let him keep playing. But I'd bet Klopp goes for Firmino for a game that is huge for City. If they lose this it will be a big lead despite the game in hand."

In terms of City's selection issues, Morrison urged Pep Guardiola to select Gabriel Jesus, a striker he said is "good with his back to goal and also offers a threat in behind".

Morrison also dismissed the idea it is a two-horse title race and despite being a Tottenham fan is worried about the Spurs defence, instead tipping Chelsea to get closer to City and Liverpool.

He added: "I think Chelsea are starting to hit form and I rate them as title contenders.

"Frank Lampard always said it would take time for the new signings to gel but we are now starting to see the best of Kai Havertz, Timo Werner and Hakim Ziyech, while Thiago Silva looks so good alongside Kurt Zouma.

"It also helps they have sorted out the goalkeeping position."