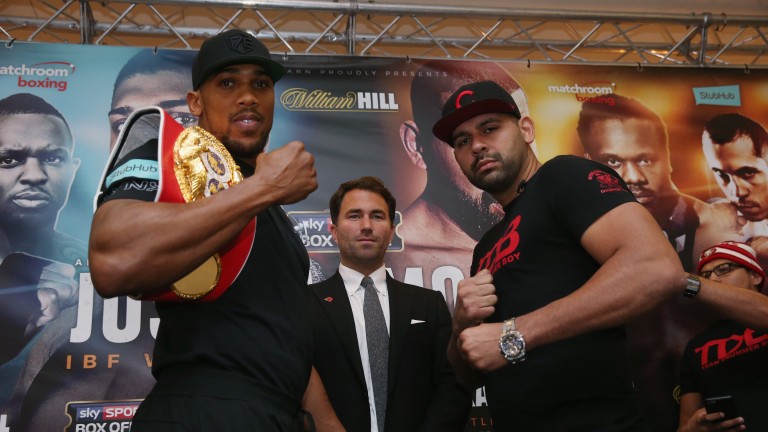 Sky Sports are doing their best to convince their customers to splash out the best part of 20 quid for Anthony Joshua’s latest title defence, but bookies believe this fight is a total mismatch and punters should not expect anything other than a 18th-straight knockout victory for the champion at Manchester Arena.

Joshua has blasted his way to the higher echelons of the heavyweight division despite having never faced a top-ten fighter, but the hype circus created by his promoters make him the hottest ticket in the division and he is playing his part by flattening whoever is put in front of him.

That may change if he takes on Wladimir Klitschko next year - Dr Steelhammer was all set to step in with Joshua before picking up an injury - but Eric Molina is unlikely to derail the train.

The special needs teacher from Texas didn't take up boxing until he was 23 and was knocked out in the first round of his professional debut. He has suffered a first-round defeat to Chris Arreola and was stopped in nine rounds by WBC champion Deontay Wilder last year, although he came out of that contest with a great deal of respect.

Wilder may prove to be Joshua's nemesis a bit further down the line and although he knocked down Molina four times the 50-1 underdog had his moments, targeting Wilder's body and at one point rocking him back on his heels.

Courage is not an issue for Molina. Wilder said after their fight "I was really surprised he kept coming and hanging in there. A lot of people said he wouldn't even be around, he wouldn't last. There were a lot of doubters, but he showed a lot of heart."

So Molina may have the odd moment, and he is probably better than Joshua's last two opponents Dominic Breazeale and Charles Martin, but Wilder out-jabbed him 71-6 and the Olympic gold-medal winner should have no problems setting up his combos and power shots.

It is likely that the Brit will win this easily, but he took seven rounds to finish off Breazeale and with the prices heavily skewed towards Joshua in the early rounds - he is odds on to win in the first three - there may be value in backing him to spend a little longer in the ring.

Katie Taylor, Callum Smith and Scott Quigg are all long odds-on to win on the undercard, but heavyweight Dereck Chisora is an interesting price to beat British champion Dillian Whyte.

The fight took on a new dimension at the press conference this week when Chisora lost his rag and hurled a table at Whyte, leading to the British Boxing Board of Control giving him a two-year suspended ban from boxing and a £25,000 fine.

They also ruled that the fight could go ahead but Whyte will keep the belt regardless of the result.

However, Whyte's conditioning is questionable and he may struggle to justify strong favouritism against experienced and clearly motivated Chisora, who has won six of his seven fights since losing to Tyson Fury two years ago with the one loss a split-decision against highly-rated Kubrat Pulev.