Plus Saturday's other contests 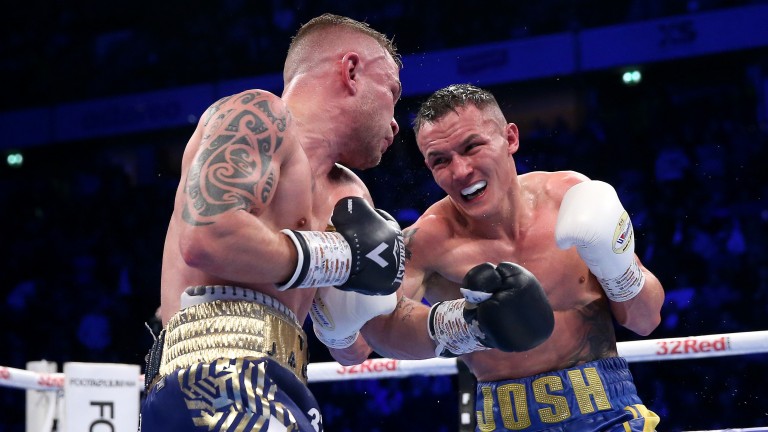 Josh Warrington was a 7-2 chance when he upset Lee Selby to claim the IBF world featherweight title in May last year and he was again the underdog at 15-8 when successfully defending that title against Carl Frampton in December.

This time Warrington is the favourite to hold on to his belt when he takes on Kid Galahad in Leeds but there is no reason to expect a different outcome.

The Leeds Warrior is unbeaten in his 28 fights as a professional and added two top-level names to that record when beating Selby and Frampton last year.

Warrington's tough come-forward style and relentless pressure was too much for those classy operators to handle, and while Galahad is yet to step in the ring with anyone of Warrington's calibre, he is a solid boxer and the Leeds crowd are likely to see a good fight.

Galahad is unbeaten in 26 contests and has worked his way up to become the mandatory challenger. Although the Sheffield man may find Warrington a step too far, he is as tough as they come and it's unlikely that he will be stopped by a fighter who has just six career knockout wins.

It's 4-6 that Warrington keeps his world title via a points victory and although he rocked Frampton his punching power maybe slightly overrated by the layers.

On the undercard, James Metcalf takes on Jason Welborn for the vacant Commonwealth light-middleweight title. Metcalf is the unexposed fighter having managed 19 wins without defeat in a fairly low-key career but he looks ready to make a statement by stopping Welborn.

Welborn is coming off a knockout loss to high-quality operator Jarrett Hurd and prior to that he was involved in two terrific dust-ups with Tommy Langford.

You have to admire Welborn's courage and desire but he is limited in terms of boxing skills and Metcalf could expose the West Midlands man.

It's 11-10 that Metcalf can get the job done by stoppage and that looks a tasty wager.

There are also two World Boxing Super Series cruiserweight semi-finals on Sky Sports on a cracking night of action and taking the 11-10 that Mairis Briedis defeats Krzysztof Glowacki on points looks a value play.

The fighters each have just a single loss on their records, both inflicted by top-lever operator Oleksandr Usyk. Briedis deserves to be favourite but Glowacki managed to go 12 rounds with Usyk and it's unlikely he will be leaving the ring before the final bell.