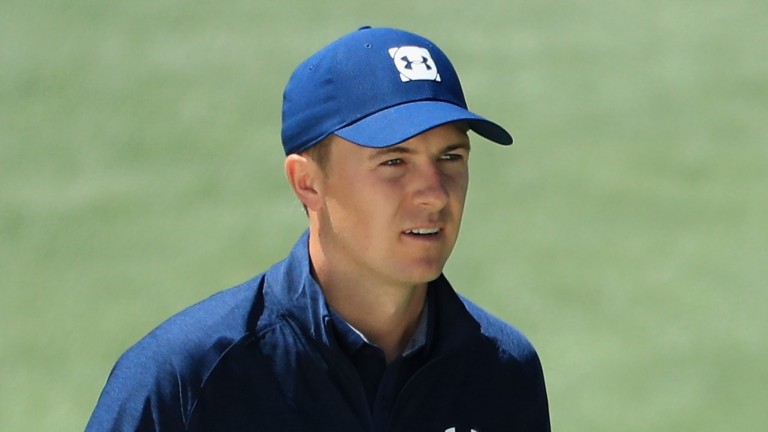 Jordan Spieth dominated day one of the Masters
Andrew Redington
1 of 1
By Steve Palmer UPDATED 11:37AM, APR 6 2018

Story so far
Jordan Spieth's love affair with Augusta National continued yesterday, the 2015 champion shrugging off a disappointing start to the season with another fantastic round in the Masters.

Spieth appeared energised as soon as he stepped on to the hallowed Georgia turf, where his form figures are 2-1-2-11, and he was two under par through three holes.

The pre-tournament 11-1 favourite bogeyed the fifth and the seventh to fall back to level par, and he thought he had pulled his approach to the par-five eighth into trouble. The ball landed just the right side of a mound, though, bouncing on to the green, and Spieth holed for eagle.

From that moment on, there was a serious spring in the step of the three-time Major champion, and he carded five birdies in a row from the 13th through the 17th. A hooked drive at the 18th looked like it may yield a double-bogey, but a superb chip meant only one shot was dropped and he signed for an opening round of six-under-par 66.

The ominous start from such a proven Augusta performer has got bookmakers immediately running for cover. Spieth is no bigger than 2-1 for the Green Jacket. Remarkably, he has led after nine of his 17 Augusta rounds.

Tony Finau, who dislocated his ankle on Wednesday night, conjured an incredible 68 despite injury on his Masters debut, while Matt Kuchar joined Finau in second place later in the day.

There are seven players tied for fourth place, including Rory McIlroy, who has been cut from 12-1 to 11-2 after opening with a 69.

Several big names made an over-par start, but none as damaging as defending champion Sergio Garcia, who plopped five balls in the water at the par-five 15th to card a 13. The Spaniard started round two nine over par, with only amateur Harry Ellis behind him.

Day-two advice
The delayed fist-pump after the birdie at the 16th said it all – Jordan Spieth could not contain his delight about how his game has peaked for the Masters, and he left that green looking ten-feet tall.

Spieth would happily have missed the cut in every event preceding the Masters if it meant he saved his best golf for his beloved Augusta, and the first-round 66 was in a different league to the vast majority of his 2018 form.

The Houston Open last week provided a late injection of confidence for Spieth – a closing 66 meant third place – and he has built on that effort in the first Major of the year.

When Spieth won the Masters, he carded a 64 from a late tee-time, then followed up with a 66 the following morning to leave the rest of the field chasing his shadow. Everyone at Augusta will be aware that something similar could be unfolding this week, with Spieth out at 10.53am local time (3.53pm UK and Ireland) for round two.

The later starters will be fearing that they will have a significant deficit to overcome by the time they reach the first tee. Spieth took advantage of benign conditions for the later starters in round one and has nothing to fear from the weather forecast for day two.

The tournament will depend on whether Spieth genuinely has turned the corner for good after several weeks of poor putting or whether the dancefloor demons which were in his head manage to creep back in over the next three days. His tail his certainly up and the start to round two will be crucial in determining which way this goes.

Patrick Reed, who has no fear of Spieth and beat him in the WGC-Match Play last month, and Rory McIlroy, who has got off to his best Masters start since 2011, are the biggest outright threats to Spieth at this stage. From three shots behind, Reed and McIlroy will feel well in the hunt.

Second-round threeball punters are pointed towards early matches. All the best value comes in the first few contests.

Cameron Smith is a great bet in the opening match (1.30pm). The rising star beat both his playing partners, Chez Reavie and Billy Horschel, by five shots in round one and there is no reason why the Aussie youngster should not boss the group again.

The back of Fred Couples is in poor condition and morning starts do not appeal to him. Haotong Li is unlikely to follow up his remarkable 69 with anything as good, and amateur star Joaquin Niemann is well capable of winning the 2.14pm match at a juicy odds.

Another fancy price worth attention is the 5-1 about Yuta Ikeda in the 2.36pm match. Tony Finau may feel more discomfort on the ankle he injured on Wednesday. The first-round exertions and a morning start could see a drop in performance. Bernhard Langer is a fading force at age 60 and Ikeda could cause an upset.