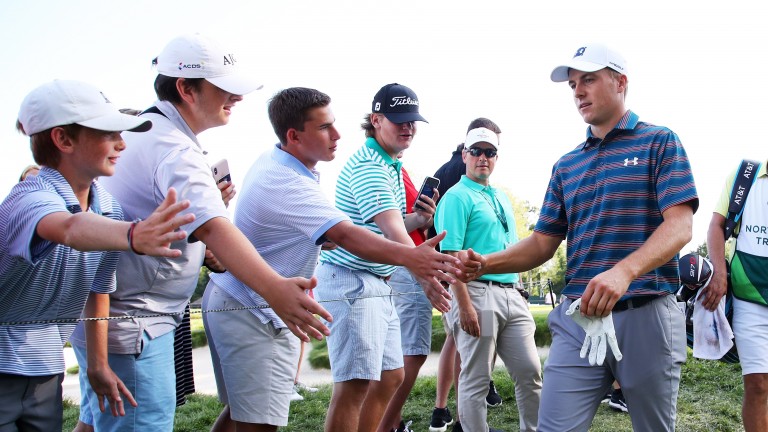 Live on Sky Sports from 7.10am Friday

Tiger Woods has been a popular choice with punters for top American honours after his Tour Championship heroics last weekend, but it is debatable whether the 42-year-old has enough left in the tank to lead his country at Le Golf National.

Woods was understandably exhausted after his East Lake triumph, an emotional victory which ended a drought of more than five years, then he stepped on a long flight from Georgia to Paris to a course he had never seen before.

Woods has told American captain Jim Furyk that he plays 36 holes a day regularly in practice at home in Florida, but that he uses a cart and the rounds take only two hours. Whether Tiger, who has a history of back problems, can handle Ryder Cup competition from dawn until dusk on Friday and Saturday is open to question.

The 14-times Major champion is determined to play a significant part in the US challenge, so will almost certainly play at least four matches, and discussions between him and Furyk will decide whether they go the whole hog and risk him for all five. Even if they opt for five, it is unlikely Woods will be able to sustain top form throughout, so an alternative is suggested in this market.

Jordan Spieth is the best-value option. Woods has just provided a golden example of how form is temporary, class is permanent, and Spieth knows he will emerge from his quiet spell at some stage. He is winless since last year's Open, but he has posted five top-three finishes since getting his name on the Claret Jug, and he has still shown himself a man for big occasions.

Third place in the Masters in April was followed by ninth at the Open and 12th in the US PGA – three solid Major efforts which shows Spieth is still a force at tough venues where the pressure cooker is fully firing. This fiesty character is made for Ryder Cup combat and has the golfing brain to plot a safe passage along Le Golf National.

Spieth seems certain to get top-class playing partners throughout to aid his chances of ending the week as top American points scorer. He has a history of success alongside Patrick Reed – they make a fearsome combination – while his great friends Justin Thomas and Rickie Fowler are the other two men likely to be in the thinking of Furyk for Spieth sidekicks.

Maybe Spieth will get three sessions alongside Justin Thomas, a superstar rookie who would appreciate teaming up with one of the few players he considers an equal in the sport, before Thomas is replaced by Reed for the final fourballs. Thomas is nursing tendonitis in his right wrist, so will almost certainly need a session or two off.

Reed has finished top American scorer in the last two editions and must be respected in this market despite his recent form slump. When not partnering Spieth, Reed could taste some action alongside Woods, with whom he has developed a friendship. Spieth is fresh from missing the Tour Championship, though, while Reed was nine over par at East Lake, so Spieth seems the more likely to play five matches.

Dustin Johnson and Brooks Koepka look highly likely fourballs partners, and Furyk may opt to keep them together throughout Friday and Saturday. But neither player is suited by Le Golf National – a short, tight track which takes driver out of the hands of big-hitters for the vast majority of rounds – and both of the powerhouses have been lacking sparkle of late. Johnson has been suffering on the greens, while Koepka went off the boil at the end of the FedEx playoffs.

Bryson DeChambeau seems set for a session or two with Woods, while Webb Simpson, better suited than many of the American team to this layout, may get a couple of sessions before the singles. Bubba Watson, Phil Mickelson and Tony Finau seem set for minor roles.