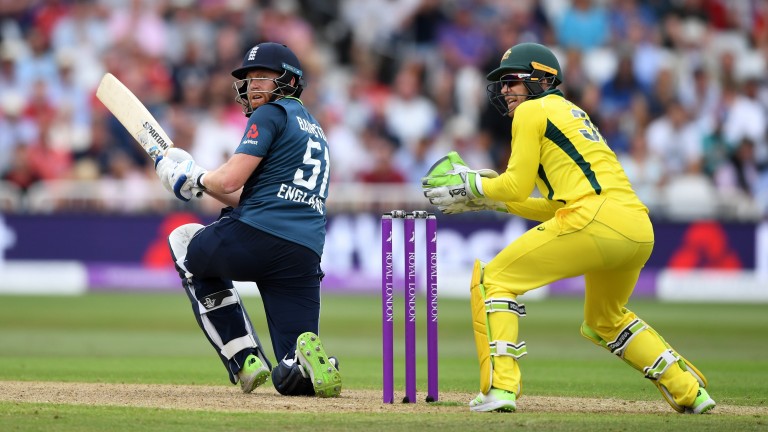 While the World Cup outright market continues to perplex football punters, there is no such uncertainty in the betting for next year's cricketing equivalent thanks to England's sensational one-day form.

The 3-1 about Eoin Morgan's men being crowned 50-over world champions at Lord's next July is under great pressure and England are as short as 9-4 to win the World Cup.

The immediate focus is on completing a 5-0 series whitewash of Australia at Old Trafford and, sadly for Racing Post Sport's 4-1 correct-score tip, another home win looks a formality.

The Aussies have been utterly outclassed in this series. Two of their batsmen, Aaron Finch and Shaun Marsh, scored centuries in the fourth ODI yet England still romped home by six wickets with more than five overs to spare.

England's openers Jason Roy and Jonny Bairstow have scored 591 runs off 459 deliveries between them in the first four ODIs and Australia's bowlers could be set for more toil on a sunny day in Manchester.

Bairstow, striking at a rate of 140 runs per 100 balls, is in scintillating form, having scored 105 off 59 balls in the shock defeat to Scotland that preceded this series.

His promotion to the top of the order has proved an inspired move by England and the 8-1 that he is named man of the match makes plenty of appeal.

The Yorkshireman returns to the scene of his first ODI century – an unbeaten 100 in a comfortable eight-wicket win over the West Indies last September.

In just 19 innings since that match at Old Trafford, Bairstow has scored five more centuries and four of those tons have come in his last seven 50-over internationals.

He had to be content with 79 off 66 balls in the win at the Riverside last time out but there is every chance he could take centre-stage in the series finale.

Australia's Marsh has had a magnificent series in a losing cause and he can exceed a runs line of 27.5. The experienced left-hander made a duck in the 2013 ODI at Old Trafford but his game has looked in good order in this series, yielding scores of 24, 131, 24 and 101.

He is happy to take his time early in his innings before exploding late on – he went from 70 off 81 balls to 101 off 92 in Durham – and that is another boost for the bet.