Johnson can finish with flourish and lead Matsuyama chase 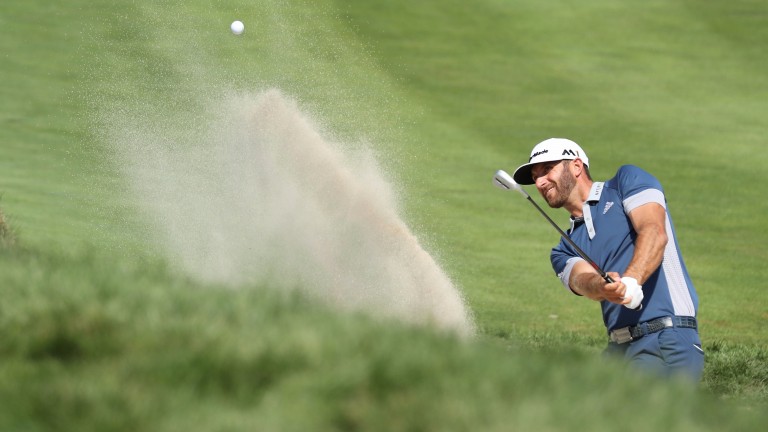 Hideki Matsuyama completely changed the course of the Hero World Challenge with some Saturday brilliance which sent him seven shots clear at the top of the leaderboard.

An exciting and close tournament was developing at the halfway stage, with several players in the elite 18-man event still in with a winning chance, but the massively in-form Matsuyama rocketed clear in round three.

The pride of Japan, who arrived at the Hero with form figures of 1-2-1-1 from his last four individual events, has reached 19 under par through 54 holes. He made an eagle and seven birdies in round three. The ante-post 8-1 chance has become no bigger than 2-13.

Chasing Matsuyama's shadow are Dustin Johnson and Henrik Stenson. The US Open champion and the Open victor are tied for second place, requiring Sunday fireworks to threaten the trophy. Tournament host Tiger Woods is in tenth place. The action resumes at 3.53pm UK and Ireland time.

Hideki Matsuyama has provided a graphic example of why current form is always much more important than course form, butchering the field at a venue where he previously flopped.

The Japanese ace tied for last place in the Hero World Challenge at the Albany 12 months ago, finishing only four under par, 21 shots behind a victorious Bubba Watson.

This time, though, bursting with confidence from two recent triumphs on the Japan Tour, as well as the WGC-HSBC Champions title, Matsuyama has obliterated the field through three rounds. Is the destiny of the trophy already decided?

It would be a shock should Matsuyama fails to convert, given how much control he has exuded over the last couple of months and the winning habit he has developed, and any round in the 60s in sunny and breezy Bahamas today will almost certainly be enough to make sure of victory.

That said, the set-up at Albany - wide-open and with five par-fives - provides the possibility of somebody shooting the lights out to give Matsuyama something to think about. Justin Rose closed with a ten-under-par 62 in the final round last year, and if Dustin Johnson or Henrik Stenson could find one of those today, the tournament may have some life.

The prices look about right, with 14-1 Johnson arguably the best offer. Big Dustin is the one most likely to board the eagle train to catch the leader.

Johnson appeals in the without Matsuyama betting at 9-4 with bet365, and the powerhouse can outgun Brandt Snedeker in the penultimate twoball.

Punters looking for another final-round twoball option are pointed towards Bubba Watson, who had a complete bag overhaul prior to the tournament and has spent three days getting used to his new equipment. The defending champion could finish with a flourish and in the process see off Jimmy Walker, who has been largely unimpressive since his shock USPGA success.