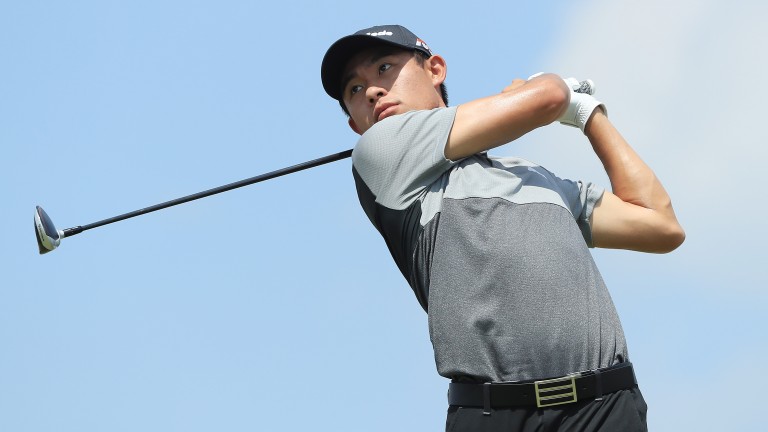 The 3M Open last week was one of the most entertaining events of the season and the two main protagonists are back in action again for the John Deere Classic.

Matt Wolff and Collin Morikawa, first and second at TPC Twin Cities on Sunday, headline the field for the low-grade gathering at TPC Deere Run, Illinois. Viktor Hovland, another starlet who has made a comfortable transition from amateur to professional, tops the betting.

Howl it from the rooftops – a new star has been born – and his name is Matt Wolff. Stateside college golf is so strong these days that the cream from that circuit are ready to mix it with the US Tour's best as soon as they turn professional, and Wolff underlined that fact in spectacular fashion last week.

A final-hole eagle – after watching the much more experienced Bryson DeChambeau do likewise in front of him – gave Wolff his maiden US Tour victory in the 3M Open on Sunday. It was such a gutsy effort from a born winner and back-to-back titles seem well within the capabilities of the cocksure 20-year-old.

Wolff has got off the mark – he is a US Tour champion – and most of those around him in the John Deere Classic betting are not. That is a significant psychological edge and this winning machine, a prolific champion in the amateur ranks over the last year or so, should fall in love with TPC Deere Run on his first visit.

Even the weather gods appear to be members of the Wolff pack, as he calls his followers, as a pre-tournament thunderstorm is forecast to drench the venue. With soft, wide fairways to attack, Wolff can fully unleash his incredible power and tear Deere Run apart.

A missed cut in the Rocket Mortgage Classic the week prior to the 3M provided a useful weekend breather and this immense athlete should have plenty of energy left in the tank for Illinois.

Another duel between Wolff and Morikawa is entirely feasible. The 3M Open runner-up has been granted special temporary membership of the US Tour and his future is looking equally bright.

Morikawa, who has been signed by the same management company who look after Tiger Woods, has the classic temperament of a typical Californian. He is laid back, calm and cool, and the way this sweet swinger covered the final 12 holes of the 3M Open in seven under par was jaw-droppingly good.

Morikawa, who finished 14th in the Canadian Open on his professional debut, did not play in the Rocket Mortgage Classic. He is fresh enough to produce his best at Deere Run and has almost certainly been tapping the brain of his good friend, fellow Californian and defending JDC champion Michael Kim for clues on how to succeed on this layout.

Hot putting is essential to success at TPC Deere Run – the winning score looks sure to be extremely low again this year – and the number one putter on the US Tour has to be in the staking plan. Denny McCarthy has performed nicely over the last fortnight, finishing 21st in the Rocket Mortgage and 23rd in the 3M, and he was seventh after three rounds of his only previous visit to Deere Run, before fading as an under-pressure rookie to 34th. He was 394th in the world for that event, but has since won the Web.com Tour Championship and is 155th in the rankings.

Wyndham Clark led the 3M Open with six holes to play, but was one-over-par to the hut and finished fifth. He lost his composure and tightened up, but has been presented with an ideal set-up with which to bounce back immediately. The long, soft, open Deere Run, where the best putters typically thrive, is made for Clark. He missed the cut by a shot in his only previous JDC, but was competing in just his third US Tour event and was world No. 1,949. This time he is 40 under par for his last 14 US Tour rounds.

Complete your team with Doc Redman, the 2017 US Amateur champion. He won a Monday qualifier for the Rocket Mortgage Classic with a round of 62, then finished runner-up to Nate Lashley in the event, banking a career-changing cheque.

Redman suffered an understandable hangover in the 3M Open, opening with a 77 before a second-round 69, and this 21-year-old brute can get back among the birdies in Illinois.

Others to note
Viktor Hovland
The Norwegian youngster is favourite with most layers and bursting with talent, but he is competing for a fifth consecutive week, so may run out of mental energy at some stage.

Joaquin Niemann
The 20-year-old Chilean has been playing superbly, marrying his typically superb ball-striking to improved putting, but his flat stick went worringly cold in the final round of the 3M Open.

Sungjae Im
The Korean birdie machine looks ready to win and Deere Run could be the scene of his breakthrough. He has consistently featured on leaderboards this season.

Bronson Burgoon
The Texan slugger finished tied second in this event last year and has shown an upturn in form over the last fortnight.

Sam Burns
The Louisiana man fired a final-round 64 for seventh spot in the 3M Open on Sunday and has the tools to produce similar scores at Deere Run.

Cameron Champ
The Sanderson Farms champion continues to disappoint, failing to build on his short blast of brilliance in the Rocket Mortgage. Deere Run offers another decent chance to get back to his best.

When to bet By 1pm on Thursday

When to watch Live on Sky Sports from 1pm Thursday

Time difference Illinois is six hours behind the UK and Ireland

Course overview The John Deere Classic has been held at the TPC Deere Run since 2000. The tournament was played in the middle of August in 2016, switching because of the Olympics, but was immediately restored to its traditional pre-Open slot. The track, crafted by DA Weibring in 1999, is one of the easiest the US Tour competitors face all season and Paul Goydos opened with a 59 in 2010. Steve Stricker carded 60 on the same day before finishing at 26 under par for 72 holes, a record finally bettered last year. The first and second holes are extremely simple, so there is scope for a fast start, and this is a birdiefest where only the hottest of putters will contend

Story of last year Michael Kim turned the event into a procession, romping to an eight-shot maiden victory, with soon-to-be-Open-champ Francesco Molinari among those tied for second place

Weather forecast A pre-tournament thunderstorm is set to soften the course up nicely for sunny, calm competition days, so scoring should be extremely low. There could be a short thunderstorm delay on Saturday

Type of player suited to the challenge Stricker, awesome with a wedge in hand and one of the best putters in the world, won this event three times in a row before Zach Johnson, a player of a similar ilk, ended that streak. The John Deere lends itself to low scoring, so support the flat-stick masters