England fast bowlers set up victory by dismissing Windies for 212 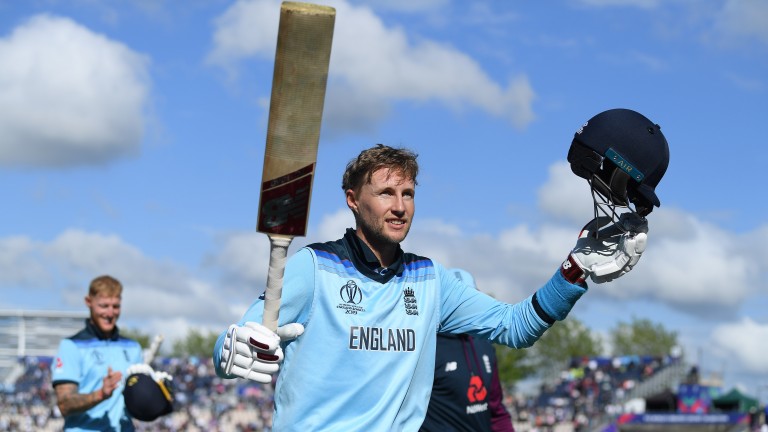 England are 15-8 favourites to win the World Cup following a comprehensive eight-wicket victory over the West Indies at the Hampshire Bowl but the win came at a cost for the tournament hosts.

Opener Jason Roy left the field with a hamstring injury and skipper Eoin Morgan suffered back spasms but Joe Root, who opened the batting instead of Roy, steered England home with an unbeaten century.

Root, tipped at 3-1 to top-score by Racing Post Sport's Liam Flin, was named man of the match but England's fast bowlers set up the victory by dismissing the Windies for 212.

Jofra Archer (3-30) and Mark Wood (3-18) had the pick of the figures although Root also played an important role with the ball, dismissing the well-set Shimron Hetmyer for 39 and West Indies captain Jason Holder for nine.

Nicholas Pooran, a 13-2 shot, top-scored with 63 but the target never looked like troubling England's depleted batting line-up and Morgan's men claimed their third win out of four at the tournament.

India are 5-2 second-favourites for the trophy with holders Australia 100-30 and the Windies out to 25-1.

Holder's men are a general 11-4 to reach the semi-finals but New Zealand, who remain top of the table with seven points from four games, are 1-3 to make the knockout stage.

England are 1-14 to follow up with a win against 9-1 underdogs Afghanistan at Old Trafford on Tuesday while the West Indies are 4-9 to see off Bangladesh in Taunton on Monday.