Jason McAteer: Klopp should be present at Shrewsbury replay 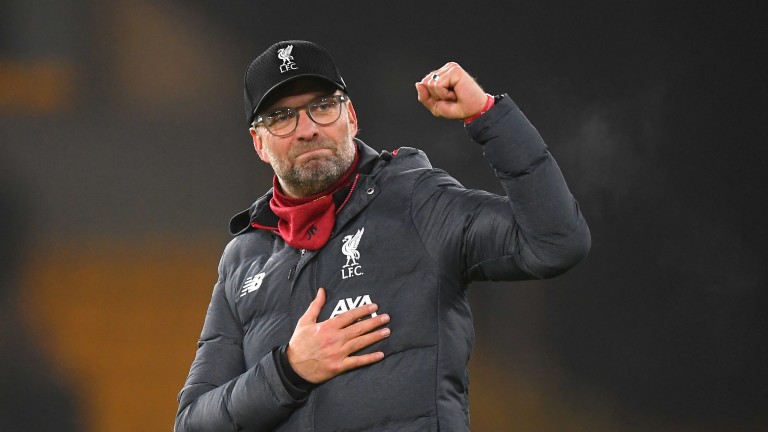 Jurgen Klopp has suggested that the end of Liverpool's Premier League winning streak may allow his team to play with more freedom
Michael Regan
1 of 1
6:00PM, JAN 30 2020

Jurgen Klopp has every right to put out whatever side he wants against Shrewsbury in next week’s FA Cup fourth-round replay – but the one man who definitely should be there is Klopp himself.

Klopp made it clear to his players at the start of the season that this briefest of breaks will be honoured and he’s a man of his word.

It was the FA and the Premier League who asked clubs to co-operate over this break and not arrange friendlies or travel abroad - to have a rest, basically. And Klopp has been happy to go along with it.

And the authorities can have no complaints about his approach to the game against the Shrews and the sort of side that Liverpool will field on Tuesday night.

Klopp has been let down by the authorities once this season over the date of the League Cup quarter-finals, which coincided with the World Club Cup and the Football League should have pre-empted the situation.

Jurgen Klopp would have sent out a strong team against Villa had there not been a clash, because when you get to the quarter-final stage of any competition you want to give it your best shot and he would have wanted to.

But his hands were tied so he’s got every right in my book to send out whatever team he likes against Shrewsbury.

My one problem is that I feel Klopp should be there – yet I understand entirely why he isn’t going to be.

He ought to be there, not necessarily as manager but as the figurehead of this club. He doesn’t have to be the manager but it would be really important for the kids who Neil Critchley will send out to play if Klopp was there in some role or other.

Where I’m being a hypocrite is that I went on record not so long ago saying these managers face burnout if they’re not careful.

We saw it with Pep Guardiola at Barcelona, we’ve seen it with Massimiliano Allegri in Italy, even Bill Shankly walked out of Liverpool because he’d had enough, even though he was still winning trophies. And nowadays, more than ever, managers get burnout and they need that mental rest from the day-to-day pressure every bit as much as the players.

Jurgen Klopp is very intense, meticulous, in the club until all hours, in his office, the dressing room or at the training ground. He’s a wanted man and that’s why he values getting away from time to time, to switch off, freshen up and come back.

His priority is to win that league and he feels this is the only opportunity he and his players will have to do that before they start again in the Champions League and make the final assault on the league.

Everybody who wants to see Liverpool winning the league would agree with that. But I’d still like to see Jurgen Klopp at Anfield on Tuesday night.

McAteer on the big football questions

Do you feel you were right for criticising Paul Pogba and the supposed negative impact he’s having on the United team?

Paul Pogba is a very, very good footballer, a World Cup winner, a commercial man’s dream with an army of Twitter followers and he could yet go on to have a wonderful career.

Do I think he’s selfish? Yes, I do. And was I right to criticise him? Yes, I think I was.

Those clips you’ve seen of me on the internet talking about Pogba were taken out of context. They were part of a long conversation about what’s going wrong at Manchester United – and there is a lot.

I still don’t think Ole Gunnar Solskjaer is the answer and most of the fault lies at the feet of Ed Woodward - who, it goes without saying, did not deserve to have his house attacked this week. That was simply deplorable behaviour from people who deserve our utmost contempt.

I understand there is frustration but that is absolutely not the way to respond.

And I get the line that the club are trying to promote about building for the future with kids, making players such as Marcus Rashford, Danny James and Mason Greenwood the cornerstone of the future.

But you have to have the right influences alongside those youngsters and generate the right atmosphere in the dressing room to send out the message that we’re all in this together.

And I just don’t sense that Paul Pogba is on-message – or wants to be.

Being in a dressing room isn’t all about talent and quality because we know Pogba has got that. It’s about an attitude and I think there is a side to him that is relatively selfish.

If he had the opportunity to move he would and his argument would be because of personal ambitions and I absolutely get that.

But he signed for Manchester United and just because it hasn’t gone well you don’t bale out without rolling up your sleeves and giving it a go.

You want Paul Pogba to be around the place even though he’s injured, you want to see leadership, positivity, character; this is what you need from your world-class players. Instead you get a vocal agent talking down the place and Pogba going off to America rather than having faith in the United medical team. These are things that young, impressionable players don’t need to see or hear.

I made comparisons between Pogba and players like James Milner, Jordan Henderson and Adam Lallana at Anfield.

I used those examples because they are exactly the kind of top professional who, even when they aren’t playing or are injured, are around the place, buying into the club ethic, the culture and the youngsters at Anfield appreciate that more than anyone.

Do you think there is a strong chance West Ham will be relegated?

West Ham are in massive trouble and I wouldn’t be in the least bit surprised to see them in danger of going down come the end of the season.

I said when he was appointed that I didn’t think David Moyes was the answer and nothing that has happened since has made me change my mind.

I think he’s still searching for what works. He doesn’t seem to know his best players or his best formation. He went three at the back against Liverpool on Wednesday but he’s also tried 4-2-2-2, 4-3-3, he picks so many different players his head must be spinning and what they definitely don’t have is a goalscorer.

What I would have expected from West Ham against Liverpool was for them to raise their game, to want to become the first team to beat the champions-elect. As it happened Liverpool didn’t have to get out of second gear.

You can write a case for Norwich, Bournemouth, Villa and Watford staying up because they’ve all had upturns in form, they are all sticking by their principles, they boast good attitudes and all four have their crowds behind them.

Look at West Ham and it’s a very different picture.

The London Stadium is not a nice place to play when you’re in really bad form and when the crowd are on you, and I think a few of their players were hiding on Wednesday.

They are out of the bottom three on goal difference but two of their next three games are against Liverpool and Manchester City. They are in serious trouble.

United definitely needed a signing with what’s going on at the club and he’s a very good player – but let's take one step at a time.

Fernandes played against Liverpool for Sporting Lisbon in pre-season in America and he stood out. He likes to get forward, is very creative when he’s on the ball, he’s got an eye for goal and he sees a pass. It’s a good signing.

I’ve no idea why it took so long and it’s a lot of money.

But a good quality signing sends out good messages and United need a lift right now.

Can Southampton become the team to end Liverpool’s unbeaten run?

Of all the teams from fourth place down who could hurt Liverpool, Southampton are probably the ones.

They are storming up the table and with one defeat in nine and Danny Ings scoring goals, it’s all positive at St Mary’s.

Don't forget, this is a side who lost 9-0 at home to Leicester - but since then they have been outstanding.

They’ve beaten Chelsea, Spurs and Leicester and Ings has been in superb form, scoring goals and being the talisman the team desperately needed.

An upset at Anfield is not out of the question because in a division where sides seem to be racked with inconsistency, Southampton are winning games and they are doing really well away.

Liverpool are relentless, especially at home, but this could potentially be a really difficult test.