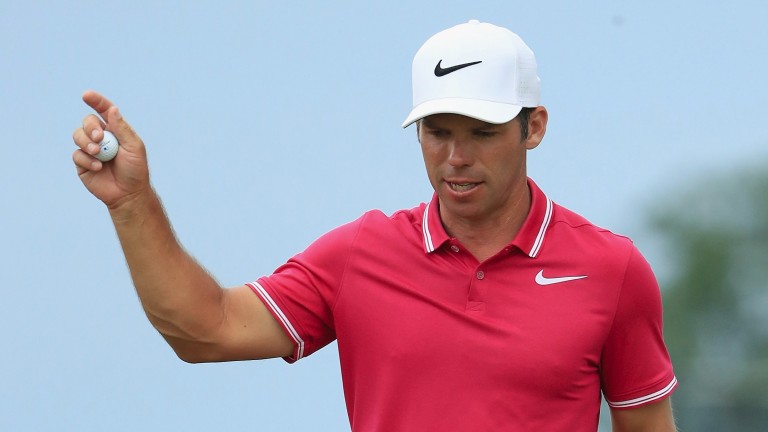 Paul Casey and Austin Cook share the lead at the halfway stage of the Valspar Championship, the pair reaching six under par through 36 holes at the difficult Copperhead Course in Florida.

Defending champion Casey, who fended off Patrick Reed and Tiger Woods for Valspar glory 12 months ago, was 25-1 to retain his title. Cook was a 200-1 rag after a poor spell of form. Going into the weekend, Casey is a best-price 9-2, with Cook slashed to 16-1.

World number one Dustin Johnson, a general 5-1 pre-tournament market leader, remains at the head of the betting. Johnson, making his first Copperhead appearance since 2010, is only two shots off the pace and 7-2 for victory.

In-running outright punters should go deep into the board when considering options at this stage. Much like with the Honda Classic at the start of this month, there is scope for players to emerge from a long way behind in favourable morning conditions, before the Florida winds unsettle the leaders on firmer afternoon turf. Ryan Palmer almost won the Honda with such a charge and similar feats can be expected over the next two days.

Casey is never the most comfortable frontrunner and the form of Cook could disappear as quickly as it came.

Dustin Johnson fully deserves favouritism after opening with a pair of 69s on unfamiliar terrain, but better value options could be Jason Kokrak, 40-1 from four shots behind despite being in tremendously consistent long-game form, and Kramer Hickok, an accurate 100-1 chance who is only three shots off the lead and could easily hang around long enough to gobble a place on a track which suits.

Third-round twoball punters are pointed towards Kokrak, who should defeat Brian Stuard in their 4.20pm (UK and Ireland time) meeting, while Johnson looks a solid investment against Luke Donald in the 5.40pm contest.